Dual Core 1, or DC1, is the first Dual Core schedule, which is the result of cutting some sleep from the second core of Segmented and the addition of one daytime nap to compensate.[1] DC1 is also considered a relatively easy schedule, and is often recommended to beginners.

DC1 was originally proposed by Polyphasic Society. Two variants are proposed, which are detailed in the Original variants section. The Discord community later slightly modified the schedule, to its current default form.

DC1's mechanism is similar to Segmented. Each core sleep is located around each respective sleep peak for efficiency. The first core is around the same length as the first core of Segmented, to preserve the amount of SWS, while the second core is cut short. This allows for sleep reduction on the schedule.

Currently, the standard variant is recommended to have a core sleep of 3h20m and 1h40m respectively. The cycle length being a multiple of 100m instead of 90m is meant to accommodate either longer sleep cycles, or extra REM at the start or the end of the sleeps.

The nap is placed around the circadian dip in the early afternoon. However, the nap on DC1 is not always filled with REM sleep and may contain mostly NREM2 for some. Nevertheless, the nap helps sustain alertness until core 1.

DC1 is often compared to E2, as both schedules have sleeps placed at similar times of day. They have a similar amount of total sleep and the same number of sleep blocks (3) per day, with the main difference being E2 having a dawn nap rather than a dawn core on DC1.

Adaptation to DC1 is usually done cold turkey. Alternatively, it is also possible to adapt to this schedule gradually by first adapting to Segmented sleep.

Since the ~3.5-hour core may not cover all of the required SWS from the beginning, partitioning of SWS may be required, which can cause difficult SWS wakes from either of the cores. High SWS requirements (at least ~150m) will likely require the extension of the first core (~4.5h instead) to cover all the SWS.

This method is likely slower than cold turkey, but the transition is designed to be less stressful from an adapted Segmented to a new DC1. However, there is no guaranteed success for DC1, and this method actually has seen lower success rate than the cold turkey method. This is largely due to the amount of time it would take to achieve good results on 2 successive adaptations.

However, for sleepers who have been adapted to Segmented and remain on it for a long time, the transition to DC1 at this point puts them on equal grounds with natural Segmented sleepers who are about to start a DC1 adaptation.

DC1 is a schedule of moderate difficulty. For naturally segmented sleepers, it is likely to be easier and more natural than E2. However, for others, E2 would be much easier, as it does not require SWS to be repartitioned. DC1 is known to be less flexible compared to E2, and as with all other Dual core schedules, it is much less tolerant to late cores.

As with other Dual Core schedules, the first core sleep needs to be placed at earlier hours of the night to cover the SWS peak. Nighttime activities that force the first core to be delayed will cause damage to the schedule. While it is possible to recover from such events occasionally after adapting, it is very detrimental to adaptation, and may eventually cause the schedule to fall apart.

The longer night gap between the cores may also not be suitable for everyone, because staying awake for many hours at night everyday can be boring and eventually overwhelming.

Not many adapted DC1 (non-extended) sleepers have been able to flex the core sleeps by much. It would require lower sleep requirements overall, or experienced sleepers to be able to manage a flexible DC1. With the second core fixed, the first core may be moved up to 1 hour forward or back. It is uncertain as to how flexible the nap can be. Regardless, more data is required to determine how flexible DC1 can be, compared to E2, whose second nap is highly flexible in a lot of adapted people.

Having only a daytime nap, DC1 is suitable for jobs that allow a nap to be taken during a break.

With only a 2-cycle SWS core on the default variant, it may not fully accommodate the extra SWS need from intense exercise.

DC1 offers a several scheduling options. However, the only significantly successful variants are the original ones and the extended variant. 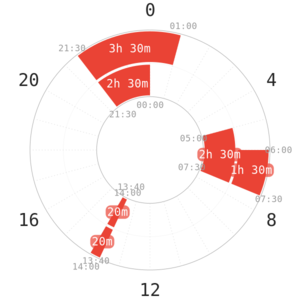 These are the versions originally proposed by Polyphasic Society. Both of these give a total of 5h in core sleep.

The first (outer) variant has the same first core as Segmented, and may allow for a smoother transition from it. It closely resembles the current default version, and most of what is said about the standard one also applies to it.

The second (inner) one is more balanced in terms SWS and REM potential, and may allow for a more complete repartitioning. However, 2.5-hour cores increase the likelihood for SWS wakes, which increases the chance for oversleeping, especially in the first core. For some, waking up from SWS and/or REM is extremely challenging and best avoided. This variant may be better for those needing more REM than SWS. Adapting to this variant may eventually result in 4 sleep cycles of ~75 minutes. However, this is mostly hypothetical and requires more data to confirm. 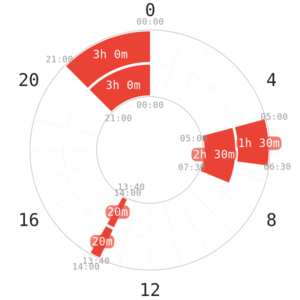 A slightly longer second core can account for a higher REM need. The higher total sleep also increases the potential to flex the cores after adaptation. This variant is considered viable, though the second core may or may not cause difficult wakes.

Using slightly shortened cores would be more difficult, as it has less total sleep time. Repartitioning of sleep stages will need to be more intense than on the standard version. This may be suitable for those with slightly lower monophasic needs (~7h). It is unknown how flexible the variant would be after adapting, since there are no records of its flexibility, and the successful adaptees did not maintain the schedule long enough. 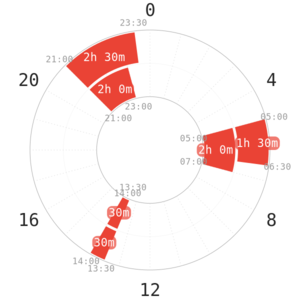 These variants are derived from Triphasic, and have significantly less total sleep than standard DC1. They extend the night and morning cores, while shortening the daytime core of Triphasic to a 30m nap for ease of scheduling. Both attempts and adaptations have been rare, possibly because of the uncommon core lengths leading to difficult wakes.

Note that these two variants are likely to be much more difficult than standard DC1 ("Hard" or "Very Hard" category), perhaps similar to Triphasic. 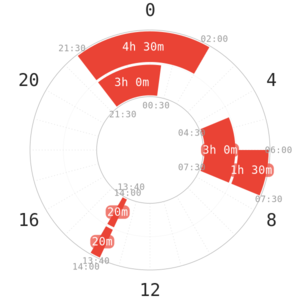 Both of these variants over the years have reported a lot of success. They are more beginner-friendly, but offer less sleep reduction. Those with a higher monophasic baseline (~9h) are also recommended to attempt these variants.

The choice between the two depends on the balance of SWS and REM requirements. The 3-3 variant would favour more balanced or higher REM needs, whereas the 4.5-1.5 favours higher SWS needs, such as with those who regularly perform intense exercise. Both variants allow a somewhat later first core (up to ~23) compared to the default variant.

These variants also allow a long morning wake gap, up to ~8-9 hours. As it has a higher total sleep time, maintaining alertness is much easier than on regular DC1. This may allow one to stay awake through the workday, and then have a nap after work (at ~16-17). These are also known to be much more flexible, both in the cores and in the nap. After adapting, one can also proceed to DC2 to as a route to adapt to Ducamayl. 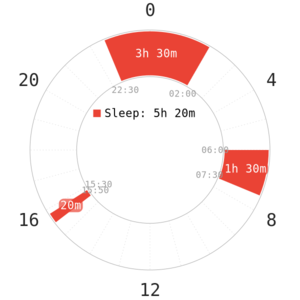 On this variant, the core gap is shortened and the core-nap gap is lengthened. This may be easier to schedule for some. However, this has been very difficult, and has essentially few successful adaptations. Individuals with slightly lower sleep needs may be more able to do this, as they can stay awake longer at a given total sleep time.

Similar to E2, the morning gap is suggested to be no longer than 7-8 hours. The evening gap can be up to about 9 hours, because sleep pressure is lower then. 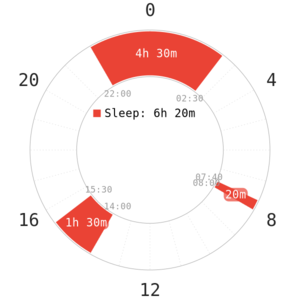 A DC1 (extended) variant with a core-nap flip

Some individuals find that a nap around REM peak results in more vivid dream recall compared to a core. This variant makes use of a dawn nap, moving the second core to a position similar to Siesta. Attempts are very rare, and only one person is known to have successfully adapted to it.