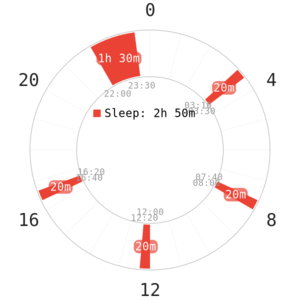 Everyman 4, or E4, is the third Everyman schedule in the Everyman polyphasic series. Even though the structure of the schedule is very short, the longest sleep block being only 90m, E4 now has the shortest core length and is one of the final step before the transition to Uberman. It consists of 4 naps to be scheduled each day, and each nap lasts for 20m, as usual. Following the Formula of Puredoxyk, E4 is now the most difficult Everyman schedule, with the total sleep being a measly 2h50m each day. It is regarded as a superhuman compromise between the sustainable/somewhat friendly E3 and the extreme Uberman. Because of the near impossibility for an average polyphasic sleeper to adapt to this schedule, it is advised that inexperienced or non-mutant sleepers should not attempt this schedule.

E4 keeps the same premises as other Everyman schedules, but under much harsher conditions. The core sleep, the small "nucleus" of the schedule, serves to provide a hopefully sufficient amount of SWS, the deepest stage of sleep that is crucial for quality of life and well-being. The naps, as usual, will provide REM sleep and traces of light sleep. However, what works on its less extreme counterparts, E2 and E3 does not work the same on E4. The core sleep is simply not long enough to sustain a 90m SWS requirement each day, taking into account of transitional light sleep. Because of this reason, at least one nap will contain SWS, because SWS' homeostatic pressure can creep into any naps, especially the last nap on the schedule.

To ensure the most amount of SWS, the core sleep is now placed at the heart of SWS peak, ideally starting between 9 and 10 PM. Because the core sleep is much shorter than that of E3, the extra nap will be added to the schedule to balance the long wake gap between the end of the core and the nap around sunrise hours. In a way, E4 is basically DC3 without the second core, as DC3's second core is also placed around the same time as E4's first nap. The overall schedule looks to be equidistant, and there is a longer wake gap from the last nap of the day to the core. There is approximately 4 hours of wake gap between each nap, which ideally fits into the BRAC concept when scheduling (~4h rhythm). After all the naps have been taken, it supposedly becomes easier to stay awake in the afternoon and evening hours, hence the longer wake gap. The naps also take advantage of the common circadian spots for sleep - the first two are during graveyard hours, which coincide with monophasic sleep time, while the third nap resembles a nap taken on a biphasic schedule (circadian nadir at noon), and the last nap is around ~4-5 PM, when core body temperature reaches the maximum value, which is suitable for short sleep durations (to ease waking up).

The sleep cycle during E4 core compresses potentially to as short as 60 minutes, which seems to be caused by an extremely short core and a high frequency of naps. That means its core duration is actually one and a half cycles, risking mid-cycle SWS wakes until the brain adapts by placing light sleep at the trained wake time.

Mostly because of E4's incredible difficulty, adaptations are very rare up to date, even though there is a minor amount of success. Though it is possible to transition to E4 as a gradual adaptation from E3, so far this has reported no success rate. It is likely that adaptation to E3 is already overbearing at that point, and another immediate transition to E4, which is below the minimum sleep threshold, is the limitation that most people cannot get to. Cold turkey method, however, accounts for all the successful adaptations (including the extended version). E4 is also an option to fall back on if Uberman fails, but so far no one has been able to pull this off, either. 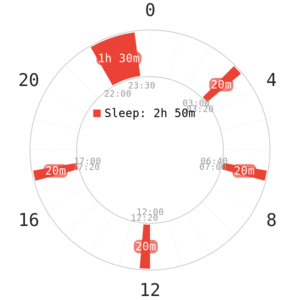 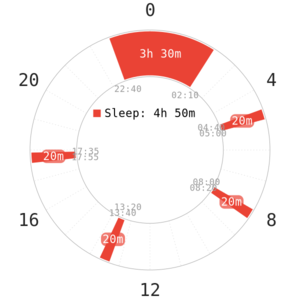 One polyphasic sleeper from the Discord community has successfully adapted to this variant. This E4 is basically E3 (3.5h core variant) with an extra nap. The extension of the core sleep creates a lot more space for SWS and REM, and alleviates the pressure on the naps. Same as the regular version, 2 naps are moved to night hours before the day starts, leaving only 2 daytime naps.

With 5 sleep blocks per day, even though E5 offers an amazing amount of sleep reduction, sleeping 5 times per day may be a concept that creates boredom and lack of motivation to micromanage that many sleep blocks. This is one of the reasons E4, whether extended or not, is far from being as popular and well-known as E3.