Random sleep is irregular sleep, which has no structure, changes from day to day and can't be categorized into any current specific sleep patterns.

Random is a highly popular sleep pattern, which has plenty of variants. Since it inherently has no rules, Random would fit any lifestyle. Sleep may be taken whenever possible or tired enough.

Random sleep was observed to cause several negative consequences, which are described below.

Irregular sleep includes multiple subpatterns, which have different total sleep time, level of randomness and structure. Some of the schedules, which have a higher level of randomness, were previously considered random, but after a few successful adaptations were separated from the Random category. This includes BiphasicX and -Amayl schedules. However, each of these schedules is based on a specific set of rules (for example, Ducamayl has 2 cores and a few naps each given day), which would make them Hypothetical rather than Random from the very beginning.

Thus, the variants of Random are the observed patterns of random sleepers, which may be combined and not be consistent. 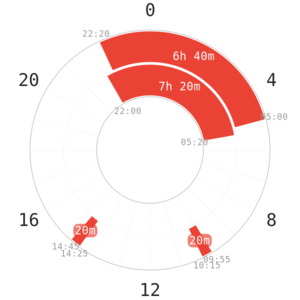 One of the mildest patterns of Random is a fairly consistent long nocturnal core, which doesn't reduce sleep and sometimes is supplied with naps in the energy dips during the day. Such sleep is mostly non-reducing. If the naps are short, this resembles Sevamayl, except having occasional monophasic days without naps. The sleep quality may be increased further by adding a dark period of 2h before the core. 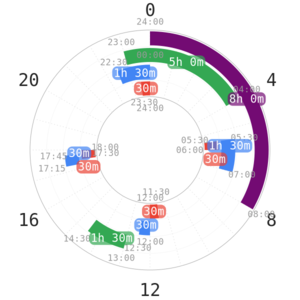 Switching sleep schedules every other day

It's possible to stay on Random involuntary by switching sleep schedules frequently. This pattern was observed in individuals, who couldn't maintain one sleep schedule consistently for a long time, thus switching between different monophasic and polyphasic schedules every other day.

Sleeping in on weekends 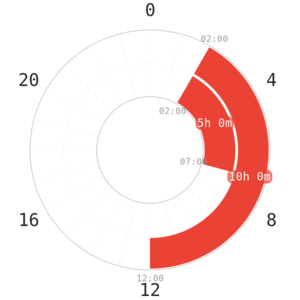 This pattern is very common, although not necessarily belongs to the Random category by itself (e.g. consistently having a monophasic core, which is longer on weekends). However, most commonly this pattern is inherent in random sleepers. It was observed in different studies that weekend catchup sleep does not fully compensate for high rates of sleep debt and short sleep on weekdays[1], often keeping the effects of sleep deprivation, such as metabolic dysregulation[2], which leads to excessive eating and obesity. Thus, it's highly recommended to have a consistent total sleep time throughout the week.

A sample sleep log on Random with short chunks of sleep

This pattern includes only short chunks of sleep (~4.5h or less) and is fairly rare. However, it is common in animals or some human groups, such as the Piraha tribe or insomniacs.

Random often seems attractive, since it doesn't require adaptation, has plenty of different variants and patterns and simply is flexible enough to fit any lifestyle. However, over decades of experience, the polyphasic community faced several disadvantages of sleeping randomly.

First of all, irregular sleep/wake patterns are associated with poorer academic performance and delayed circadian and sleep/wake timing, studies suggest[3]. This makes strict schedules preferable over those with a higher level of randomness.

It was also noticed in the community that habitual random sleep often reduces discipline, which makes it difficult to adapt to strict sleep schedules afterwards. Moreover, random sleepers are more likely to have reduced sleep quality, which contributes to the adaptation difficulty as well.