A nap-only schedule is simply a sleep schedule without cores.

Since REM and SWS cannot realistically be cut, all (or at least as much as possible) of them must be accounted for by naps. The extremely low total sleep time means it requires intense sleep compression, possibly reducing the cycle lengths to under 60 minutes. After adapting, falling asleep becomes very quick and the transition to REM or SWS would also be almost immediate, giving nearly negligible amounts of light sleep. This would allow up to about 1h50m of REM and SWS combined. Even so, this is still far below the combined requirements for most people, which means REM and/or SWS have to be cut to maintain this schedule, which is considered unhealthy.

Since maintaining the schedule involves such high levels of sleep pressure, circadian rhythm is much less important than on other schedules with peak-aligned sleeps, making it possible to have SWS-filled naps in REM peak hours and vice versa. 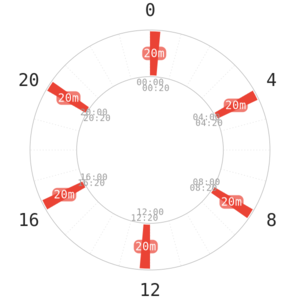 Uberman, sometimes denoted as U6, has 6 20-minute naps equidistantly placed throughout the day. Uberman has 2 hours of total sleep time. This is one of the most popular polyphasic schedules, although the success rate remains quite low due to its difficulty. 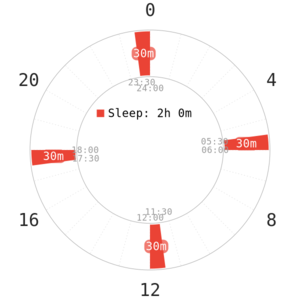 Dymaxion, sometimes denoted as D4, has 4 30-minute naps equidistantly placed throughout the day. Dymaxion has 2 hours of total sleep time as well. Alongside with Uberman, this schedule is highly popular. The difficulty often is considered higher than the Uberman due to longer wake gaps, although Dymaxion is more convenient socially for this reason. 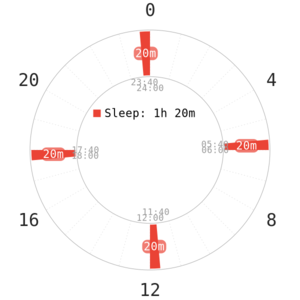 Tesla, sometimes denoted as U4, has 4 20-minute naps equidistantly placed throughout the day. The total sleep time is 1 hour 20 minutes. This schedule combines the characteristics of Uberman and Dymaxion, and has an extreme difficulty. There were no successful adaptations to Tesla so far. 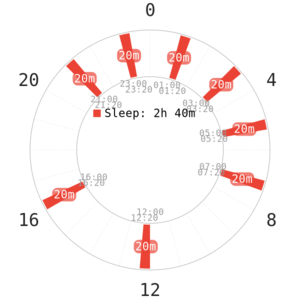 Spamayl, an acronym for "sleep polyphasically as much as you like", is an inherently flexible nap-only schedule. It usually consists of 20-minute naps, which are taken every time whenever tired enough. Their length can be somewhat longer, which allows to get more SWS and REM.

The success rate of this schedule is quite low due to its extreme difficulty. Unlike the other -AMAYL schedules, most adaptations to Spamayl were completed cold turkey. The total sleep time is generally 3-4 hours.