Scheduling sleep is a complex topic that involves many aspects and must be done in accordance to one's individual needs. With a poorly designed polyphasic schedule, you will experience crippling sleep deprivation and most likely never adapt, wasting weeks or months of your life. This page details the current consensus on scheduling.

Sleep is a complex phenomenon that causes physiological changes all over the body. However, it mainly affects the brain. According to the electrical activities in the brain, sleep is divided into rapid-eye movement (REM) and non-REM (NREM) stages. NREM sleep is further divided into three stages according to the frequency and amplitude of brainwaves.

NREM Stage 1, accounting for 5-10% of total sleep in monophasic adults, is the lightest of all NREM Stages. During this stage, awareness to the external environment and consciousness is diminished. Some people experience hypnic jerks or hypnagogic hallucinations during this stage. A mix of alpha waves and theta waves are present in this stage.

NREM Stage 2, accounting for 45-55% of total sleep, is deeper than the first one. It is more difficult to be awaken from than from the NREM 1. This stage is characterized by K-complexes and sleep spindles, which are abrupt interruptions in alpha waves activity. This stage of sleep also plays a role in maintaining wakefulness over long periods.

NREM Stage 3, accounting for 15-25% of total sleep, is the deepest of all sleep stages. This stage contains primarily delta waves, which are high-amplitude and low-frequency. Hence, this stage is also known as slow-wave sleep (SWS). It is very difficult to wake up from this stage; attempts at doing so tend to result in sleep inertia -- a period of intense grogginess and impaired cognitive function. This stage of sleep plays a critical role in the maintenance of the brain through the glymphatic system. This process takes about 30 to 60 minutes of continuous NREM3 to complete, and could be hindered by schedules containing only short naps.

REM, accounting for 20-25% of total sleep, is characterized by high frequency, low amplitude activity that resembles that during wakefulness and rapid eye movements. In this stage, muscles are also paralyzed and body temperature becomes unregulated. Vivid dreams are also often experienced during this stage, and the muscle atonia (paralysis) prevents the sleeper from acting them out.

SWS and REM (collectively termed vital sleep stages) are the most necessary for the body, and in general cannot be cut. When a sleeper does not get a sufficient amount of SWS or REM, the respective pressure starts to build up. As the pressure builds, the body starts to favour that kind of sleep over others. At some point, this can lead to sleep-onset REM (SOREM) and sleep-onset SWS (SOSWS), which enables a sleeper to gain the required amount of SWS and REM in a shorter amount of time. Moreover, when sleep is restricted, vital sleep stages displaces light sleep (NREM 1 and 2), which further reduces the amount of total sleep needed to sustain the body.

However, as NREM 2 gets reduced, the ability to stay awake for long periods diminishes. This is why schedules with less total sleep time (TST) need more sleeps spread throughout the day to be sustainable. Taking a ~20-minute nap or a ~90-minute single-cycle core helps a polyphasic sleeper sustain wakefulness. Maximum wake gaps are dependent on the schedule, time of day, as well as the sleeper's individual needs. With gaps too large, one will always experiences bouts of tiredness during it and be unable to fully adapt to the schedule.

The circadian rhythm is the body clock aligned to local solar time by light exposure and food intake, among other factors. It generates hormonal changes throughout the day consistently to produce effects on the body. One of the main effects is the secretion of melatonin, the presence of which is essential for entering SWS, and also affects the timing of REM sleep.

After sunset when light levels reduce, the body starts to secrete melatonin to promote sleep. The rising levels of melatonin early in the night allows the body to gain SWS in the first few sleep cycles. In contrast, as melatonin levels drops in the morning, REM becomes the preferred sleep phase to be gained. 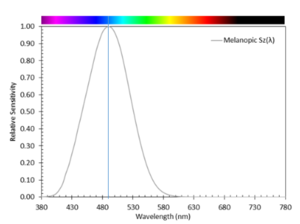 In modern times with the advent of artificial light, many people's circadian rhythms have been pushed forward (i.e. later). However, this exposure to artificial light sources also compromises people's ability to gain SWS efficiently. The extent to which light influences the circadian rhythm is given by the melanopic light sensitivity function, which peaks at ~480nm (blue) and drops off on both sides. To reduce this effect, a dark period must be employed, during which blue and green lights must not enter the eye. This can be done in many ways, such as with red goggles or screen filters.

To maintain the stability of the circadian rhythm, all polyphasic sleep schedules must stay relatively consistent day-to-day, without large changes in core or dark period timings. As such, schedules that are not aligned with the 24-hour day are unsustainable and unhealthy. Examples of which includes cycles longer than 24 hours (delaying sleep phases continually) or employing drastically different sleep schedules on a day-to-day basis.

Since vital sleep stages are generally not possible to reduce, the extent of compression required to sustain a schedule increases dramatically as total sleep time reduces. Compressing sleep, however, requires adaptation, and greater levels of compression necessitates harsher and/or longer adaptations. As such, schedules can be classified by their difficulty level, which is mostly a function of the amount of sleep cut.

It is worth noting that younger individuals whose brains and bodies are still developing will need more SWS and REM than adults, which increases their minimum sleep thresholds and makes reducing sleep more difficult. In addition, it has been suggested that NREM2 might have other functions in the development of the brain, and thus cutting it could be potentially problematic.

It is recommended that one stay above these limits at all times to prevent adverse effects on health. The necessity of vital sleep stages also implies that certain schedules, such as Uberman or Dymaxion, will be unachieveable for most people as its total sleep is below the total vital sleep required for most people.

Here is a basic classifcation of schedules by their difficulty level, assuming a typical sleeper with 8h monophasic sleep and normal levels of SWS and REM:

Sleeps on polyphasic schedules are broadly categorised into cores and naps.

Cores are long blocks of sleep that contain at least one full sleep cycle. They are typically scheduled to be a multiple of a 90 minutes, which is a common sleep cycle length. However, alternative core lengths can be done to either to plan for alternative cycle lengths or in an effort to gain extra time in SWS or REM. Cores are generally considered to be essential, because they provide the necessary amount of SWS to sustain life. As such, schedules without cores (i.e. nap only schedules) have extremely low success rates.

Naps are short blocks of sleep, typically about 20 minutes on default schedules. Naps allow for a small amount of REM to be gained. Moreover, naps help sleepers sustain wakefulness through gaps. Longer naps (up to ~45 minutes, known as pronaps) can be used in during the REM peak around dawn to gain even more time in REM. Longer naps in other times of the day can lead to SWS wakes, which can be exceptionally difficult to wake from for some people, especially during periods of high SWS deficit.

Core sleeps are favoured during night time, as they allow sufficient time to complete SWS-filled sleep cycles. They are also easier to schedule at night for most people due to social obligations. Naps are favoured in the day, since deeper sleep stages are less likely to appear then. After adaptation, naps can be relatively flexible, whereas cores are much harder to move.

During adaptation, most polyphasic schedules (other than non-reducing ones) are strict, that is, they must be done very consistently, without missed sleeps, moved sleeps, oversleeps, or undersleeps. If your life schedule cannot accomodate the sleep schedule you are planning for almost all days, it is unlikely that you will ever be able to adapt to it. One or two minor mishaps should not cause too much damage to your adaptation. However, as the mistakes accumulate, your chance of successful adaptation decreases. It is therefore necessary to plan ahead and avoid these mistakes, by carefully scheduling your life around the sleeps as well as setting proper alarms to avoid oversleeps.

Two main schedule types have been practiced by humans since time immemorial: Segmented -- with two long sleep in the night separated by a wake gap, and Siesta -- one long sleep in the night and a shorter sleep in the afternoon. Of course, the schedule timings of the ancient people are more flexible and thus likely contains more total sleep than the current standard ones. Most current polyphasic sleep schedules evolve from monophasic sleep as well as the above two historically common schedules.

The Biphasic line of schedules consists of the two historical polyphasic schedules, as well as E1, which is also considered a variant of siesta in an Everyman style.

The Everyman line of schedules are formed by removing sleep cycles in the end of monophasic sleep, and adding naps to compensate for the lost time in REM and sustain wakefulness.

The Dual core line of schedules does the same thing, except to Segmented instead of monophasic sleep.

Over the decades, the polyphasic sleep community has developed several lines of schedules that have been known to work.