There is some equipment that polyphasic sleepers often use to aid adaptation. This includes sleep trackers, alarms, pillows, different kind of software, red glasses or filters for dark period.

Electronic devices, which are known as sleep trackers, are widely spread. These are both specialized devices, such as ZeoEEG or Oura Ring, and devices for various purposes, such as Olimex OpenEEG, fitness bracelets or even smartphones. However, most sleep trackers have very low accuracy, and it's recommended to use only electroencephalographs (EEG) for tracking sleep stages. They are the most accurate since they track brain waves directly. Worth mentioning, some of the other devices are useful for tracking total sleep time. 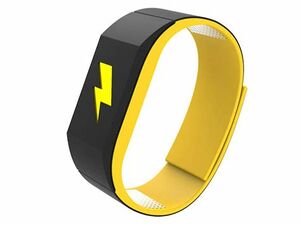 Pavlok is a wrist-worn alarm, which uses vibrations, beeps, and electric shocks to wake you up. Usually is used for extreme sleep schedules. 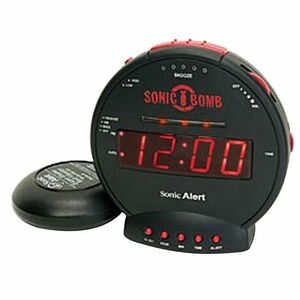 Sonic Bomb is an extreme alarm clock, which has three modes:

This alarm is a good choice both for extreme schedules and for the easy ones. The vibration mode may be useful for those, who live with the roommates, to not wake them up. 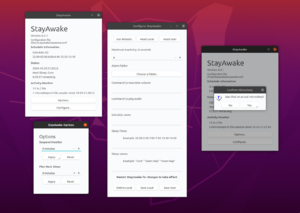 StayAwake is an advanced, cross-platform activity alarm system written using PyQt5. Currently, it has support for Linux and Windows, and support for macOS is planned for the future. It tracks your activity by detecting your mouse clicks and keyboard presses. If a custom-defined period is reached without a user event  it will sound an alarm. It also supports other features such as automatically turning off the alarm system during your predefined sleep period and suspending operation temporarily.

NoMoreOversleeps (NMO) is a very simple JavaFX application which is designed to help you adapt to a new polyphasic sleeping schedule. NMO is essentially an alarm clock on steroids - it tries to make sure you are awake during waking blocks, and sleeping during naps.

NoMoreOversleeps consists of two parts - an automated background monitor and manual remote control. The automated part will try to wake you back up if it thinks you are asleep when you shouldn't be. The manual portion offers the ability for a third party to monitor you remotely so that they can do the same. In this way, you have the advantage of both a computer and a human (or more than one) being able to monitor you, which will hopefully allow you to avoid any unwanted oversleeps.

There are different kinds of software, which tracks your computer activity. This is essentially useful for those, who have a good idea when they spend their time on the computer. Activity trackers can often be used to see what types of activities you performed at certain times, which is useful for tracking oversleeps.

Napchart is a site made for polyphasic sleep planning. It lets you plan out 24 hours visually in a circle, and share it with a short 6-digit link. Is usually used to represent polyphasic sleep schedules.