I am the maintainer and administrator of this Wiki, and advisor of Polyphasic Sleep Discord. My hobbies include Linux, machine learning, and astronomy.

I started my polyphasic sleep journey back in 2018, when I joined the Discord community and soon started my adaptation to E2. However, that attempt took very long, lasting from August and finally adapting in December of that year. That can be attributed to several reasons, including my higher SWS needs from being underage. Unfortunately, my success was short-lived, and fell apart by late February 2019. After that I fell back on E1 and stayed there until July. And then, after a brief sickness the entire sleep compression fell apart, sending me to mono with optional nap.

I became dormant in the Discord since then, with barely any activity until August 2020, where I spontaneously checked back and decided to start another attempt some time later. Eventually I decided to start E2 again, with slightly different timings compared to the 2018 attempt. 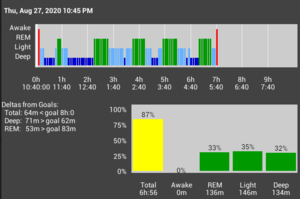 Representative recording of my monophasic sleep

My monophasic sleep pattern, with only natural wakes, fluctuates between 6.5 and 7.5 hours. Despite this, I also have a significantly larger baseline of both SWS and REM, at about 2h10m each on monophasic. This means my sleep is far more compressed than average even without any repartitioning brought by polyphasic adaptations.

The SWS baseline of 2h10m has been shown to be maintained even in my E2 attempt, where sleep was significantly cut. REM, however, significantly decreased to about 1h30m. Over a period of 3 months, I did not experience significant REM pressure. However, since I did not adapt to the schedule, it is unclear whether that baseline can be substantially reduced.

I first started this attempt with a 4 hour core and with both naps 35-40 minutes. However, tiredness started to intensify more and more. Then, I switched to 4.5 hour core, while maintainin3 months later in December 2020, I gave up the attempt as progress stopped. I appeared to have been stuck in Stage 3/4 loop and experience bouts of tiredness. Despite the sleep deprivation, I still experienced intense difficulty taking naps, being unable to fall asleep for most of them. I switched to Segmented with natural wakes for recovery, though with a much smaller amount of sleep than normal.

After failing the E2 attempt in late 2020, I started Segmented-recovery, which does not contain naps and helps me avoid the difficulty taking naps. Surprisingly, so far, the total sleep amount did not increase by much from E2 to this schedule. This may eventually allow me to adapt to Segmented-shortened, but only time will tell.