Everyman 2, or E2, is a highly popular schedule in the Everyman line. It consists of 2 naps and a core sleep of 4.5h (3 full cycles) by default.[1]

E2 was given by the Ubersleep Formula that details the Everyman schedules with the number of naps depending on the duration of the core sleep. It was presented a version of Everyman that is closer to mono than E3 is. It was originally called E4.5, to represent the core duration, but has since been renamed to E2, to represent the number of naps to maintain consistency between different schedule lines. In recent years, it has been a highly popular schedule, as it provides a significant sleep cut without being too inconvenient or difficult to adapt to.

E2 removes two cycles from monophasic, and adds two nap, each containing similar amounts of REM to the removed cycles. The core sleep of E2 has 3 full cycles of 90m each. By default, the first nap is scheduled at around sunrise, and another nap is scheduled in early afternoon. Two naps break the long day into shorter wake gaps, which helps the body sustain itself on reduced total sleep.

The wake gap between the core and the first nap should be the shortest, while the gap before core can be the longest because of higher alertness during late afternoon hours. The first nap can be between 3.5-5h after the core, and the last nap can have an 8-9h wake gap until the core.

The 4.5h core allows all SWS needs to be met even during adaptation, since monophasic sleepers typically gain all the required SWS by the middle of the night, after their 3rd sleep cycle. The ideal core placement is around around midnight, for a good balance of REM and SWS pressures. It is recommended for the first nap to be placed the middle of the REM peak of 6-9AM, allowing high quality REM sleep for the nap. The second nap on E2 may only contain light sleep rather than REM sleep, especially if this nap is late into the afternoon (e.g, 4 PM onward).

Over time, natural wakes will be start to happen in naps, but less so in the core, until after a long time of staying adapted on the schedule. In which case, the core duration may naturally shorten to approximately 4 hours, but this is very rare so far.

Once E2's adaptation is complete, the next step can be E3 or E3-extended (if E2-extended is attempted).

Adaptation to E2 is considered relatively mild and has had quite some success among polyphasic sleepers. However, it is significantly harder than Biphasic schedules. The REM deprivation in the adaptation process makes it challenging to wake up from the sleeps.

As a moderately difficult schedule, adapting to E2 is an accomplishment. The main benefits of E2 often include:

E2 is often done by students or those working part-time jobs who are able to nap before, between or after school or work. Full-time jobs can work with this schedule, only if you are able to take a nap during the workday.

Night owls often appreciate this schedule for the ability to rotate it relatively late. Core can be as late as 1-2am, making it relatively nightlife-friendly. The standard scheduling of E2 also requires only 1 short nap to be taken during the day, making it easy to schedule.The restorative power of a 20m nap can often support alertness for several hours in the day.

One thing to note is that those with high REM requirements who cannot complete E2 adaptation can switch to a Dual core schedule with a longer sleep around dawn. The potential insufficient time in REM can be a weakness of E2 and other Everyman schedules, where the repartitioning of REM sleep for these individuals is considered difficult when relying only on 20m naps.

The ability to exercise to some extent and accommodate many lifestyles after adaptation is also very appealing. Although taking a lot of damage, one adapted E2 sleeper (4.5h core) was able to fully recover from a 5-hour timezone change. Two other adapted sleepers were also able to consume mild amounts of cannabis during and after adaptation.

This schedule is also good for people who share a bed or room with someone else. It is not too difficult to find a sleep or wake time to match a monophasic person, if they agree to a consistent sleep or wake time.

Because E2 has substantially more sleep than the minimum threshold for most people, it allows a range of scheduling options. Over the years, there have been several successful adaptations to the variants below. 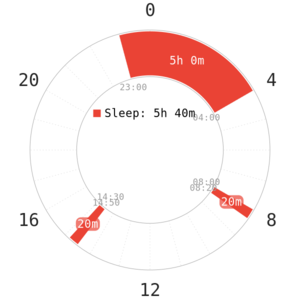 This variant is still called E2 (not extended), as it is a minor extension. The reasoning behind this is that, as most of the SWS should have been accounted for by the 4.5h mark, adding sleep after it should allow more REM and light sleep to be gained, potentially easing the adaptation. However, during the adaptation, it may be somewhat difficult to wake up from a 5h core, before one gets used to the length.

The potential benefits this variant compared to the standard one might include:

As with all the other slightly extended variants, this variant is expected to tolerate slightly more disruptions from time to time, including insufficient time to cool down or a slight delay of start time.

One sleeper has shown that a 5h core E2 can be a path to Sevamayl adaptation. The buffer amount from the slightly longer core sleep allows more flexibility of both the naps and the core itself. For these reasons, 5h core is recommended as an alternative to the default one. 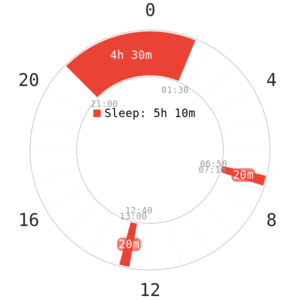 E2 with a core in SWS peak

An early core variant places the core in the whole SWS peak, or parts of it (e.g, starting core at 20-21). Those who pick this variant are often early sleepers. Both naps are moved back to to start earlier. The second nap, now close to noon, can fit better into the noon break.

This variant provides many nighttime hours awake, similar to Segmented or other Dual core schedules. However, this variant may be more difficult to adapt to, because there is only one morning nap after staying awake for long hours at night. Those who usually have a later bedtime should avoid this, unless it is the only viable option. 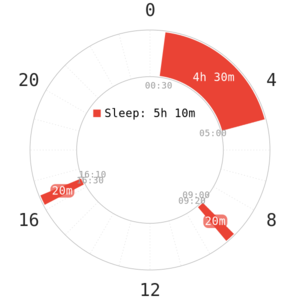 E2 with a core out of SWS peak

This variant allows the core to be scheduled out of SWS peak up to about 2 AM, with circadian management (daylight lamps before dark period, later food and exercise). Those with lower SWS requirements will have an easier time adapting to this variant.

As REM pressure is still relatively low until after 2-3 AM, it should be possible to gain SWS in the early cycles of the core.

However, naps should not be rotated equally late without particularly strong circadian management. The gaps before both naps can be shortened by 30 to 60 minutes compared to standard. The first nap should be kept close to REM peak ending by 9AM (latest 10AM), and keep the second nap before 5PM to avoid getting SWS in it. Still, the wake gap before core should be no longer than 7-8 hours, as that has often caused failures to adapt. A few did manage to adapt to a larger gap, but this is rare and is not recommended. 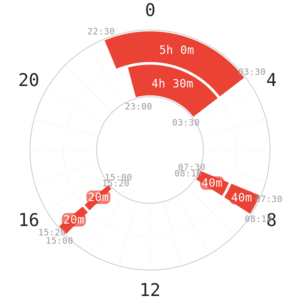 The pronap has been applied in a lot of E2 variants and has reported some success. The pronap is a longer nap around REM peak, usually between 30 to 45 minutes, which allows more REM sleep. This may help people with higher REM requirements to adapt. The longer nap may also allow a longer wake gap after it (possibly up to 8h) if there is no chance to nap around noon or early afternoon. However, so far the success rate with the long wake gap is still not high, even with the pronap. Thus, it is recommended to still limit the gap to about 7 hours.

The pronap may also be incorporated into the 5-hour core variant. This variant has seen few attempts, and has not seen any success so far. People with higher sleep requirements may find this variant easier to adapt to.

40- and 45-minute pronaps so far have reported adaptation success.

Note that during adaptation, pronaps may be more difficult to wake up from, due to intense REM wakes or SWS wakes. It is therefore necessary to use extra alarms for it. 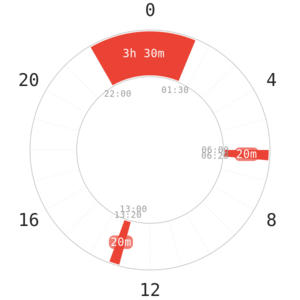 This variant has been adapted to by a new father in the Discord community. He scheduled a pronap while shortening the core down to only 3h20m. He has been adapted to this variant and maintaining it in the face of daily life for more than a year (and counting). Only sleepers with at least slightly reduced sleep requirements (6-7h) should attempt this variant, which is effectively E3 with one fewer nap, where E3 by itself is already a very intense schedule. 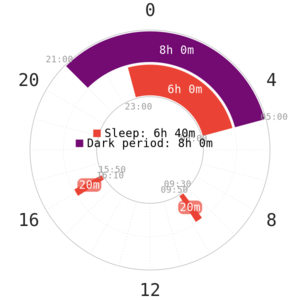 The core on E2 can also be extended, making it 6 hours long. However, it has a low success rate, and only a few have adapted. The only people who would need this are those under 18 years of age, to get a safer amount of sleep (6h40m) for the developing brain and body. Teenagers are often sleep deprived, and adding a nap before and after school can improve alertness if the core cannot be lengthened due to lifestyle. Note that these naps must be adhered to on the weekend as well, skipping will cause intense tiredness beginning 1-2 hours after the skipped nap.

However, E1 is usually preferred over E2-extended because of the more convenient scheduling. On E2-extended, the total sleep is high, which often causes high sleep onset for all sleeps. Similar to E1, naps often take a long time to learn. So far, there has been one successful case in which the first nap scheduled only 2h after the 6h core (a high sleep requirement individual). This makes the variant easier to schedule, but can be difficult or impossible to fall asleep only 2 hours after a long core. 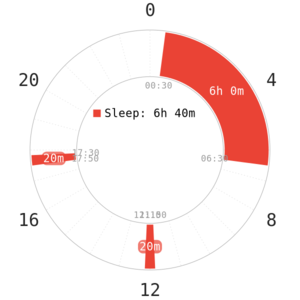 This E2-extended allows the core to start at a reasonable time, similar to on monophasic core sleep. If the bedtimes are the same, then the transition to this core length should be relatively easy. The remaining naps are then placed around the noon break and after-school/work hours. Since there is no successful adaptations with this scheduling so far, it is still mostly hypothetical. More data is needed to conclude if this variant is viable. 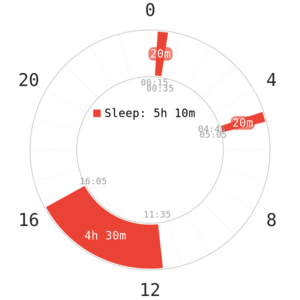 E2 is one of the few polyphasic schedules with successful adaptations with night shift work. Working night shifts greatly increases the adaptation difficulty for all schedules, and even normally easy schedules like Segmented can become extremely difficult. As with all other schedules for night shift workers, strong circadian management is needed to adapt to this schedule. Long term health issues may still ensue from a shifted circadian rhythm.