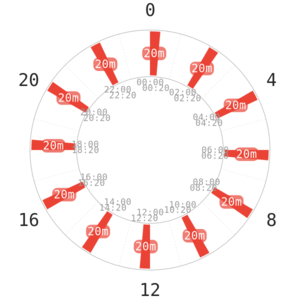 Naptation is an extreme method to prepare for a polyphasic adaptation, which involves taking frequent naps throughout the day. The goal is to get used to napping and/or getting SOREM in naps.

A standard Naptation lasts several days as a preparation for a goal schedule. This is a nap-only schedule, which technically is a variant of Uberman with 12 naps. However, adaptation isn't the goal, which distinguishes Naptation from other sleep schedules.

For those, who have difficulties with falling asleep in naps, it's common to stay awake for 24-36 hours before starting Naptation, although this step isn't required, since low total sleep time eventually makes it easier to fall asleep.

Intense sleep pressure is supposed to lead to REM or SWS rebound after a few days, which makes naps quality better. This is when the result of Naptation can be considered successful and switching to a goal schedule happens.

Naptation can be applied differently depending on the goal and final schedule.

This method is often used before schedules with a high total sleep time when the goal is to learn to nap. Once naps start to work better, the sleeper switches to recovery for recovering intense sleep debt after Naptation. It's often recommended to start polyphasic adaptation without prior sleep deprivation, which helps to keep adaptation milder, with a shorter Stage 3.

The napping skills supposedly remain even after recovery.

This method is beneficial in two situations. Firstly, insomniacs might find it useful before starting a schedule. Naptation increases sleep debt, and higher sleep pressure makes it much easier to fall asleep after jumping to the goal schedule.

Secondly, this method can be used as a preparation to Uberman, starting with 12 naps and gradually decreasing the number to 6. Extra naps at night for getting more SWS allow to slightly delay SWS rebound.

It's possible to modify Naptation in different ways.

This modification makes Naptation less extreme. Core(-s) partially or fully account for SWS, which delays SWS rebound and generally makes it easier to stay awake. Such schedules as E5 or DC4 can be used temporarily as Naptation.

Possible disadvantages include the inability to nap for a longer time, although the total sleep time is low enough to make such variants efficient as well.

The reduced number of naps may be better under certain circumstances. This includes difficulties with falling asleep on the standard variant after some time passed.

Another benefit is a possibility to have fewer naps during the day, which makes such variant more convenient socially.

Another possible variant is a Spamayl-like Naptation. This means a nap should be taken whenever the person is tired enough, without a strict nap placement.

The main possible disadvantage is the reduced sleep quality due to flexing. It may take longer to fall asleep in naps compared to the standard Naptation variant.