Everyman 5, or E5, is the last schedule in the Everyman series. As the last schedule, E5's core is reduced to the very minimum duration for a core, and it has the most number of naps out of all Everyman schedules (5 naps per day). Because of the total sleep of only more than 3 hours, it is considered the last Everyman schedule before one can transition to Uberman sleep (2h total sleep). This schedule's total sleep is below the minimum threshold for long-term sustenance (~4h total sleep), and should not be attempted by average sleepers.

It was also proposed by Puredoxyk in her book Ubersleep, as part of the Formula where an Everyman variant is expected to have 4-5 naps per day[1] if the core lasts for 1.5h. Despite Puredoxyk's proposal of the schedule, she did not mention any details about how to optimally schedule it. Until recently, the Polyphasic Discord Community proposed it as a way to transition to Uberman, because it also has 6 sleeps per day, and the core will be reduced to a nap.

E5 is similar in structure as other Everyman schedules, having 1 core sleep and more than one nap. However, similar to E4, E5 can create an impression of a nap-only schedule, as the core only has 1-cycle duration, and a 90 m duration is often mistaken for a nap outside polyphasic sleep's context.

The core sleep cannot support a regular amount of SWS requirements (~90m), and when vital sleep is repartitioned into each sleep block, any naps in the day can generate SWS wakes. Once REM pressure builds up, adapters will have to manage the intense sleep inertia from each REM wake. Long crashes can occur frequently during adaptation due to SWS wakes, and stage 3 is expected to arrive only a couple of days in, because of a gargantuan sleep reduction from an average monophasic baseline (8h).

With the high density of sleep across the day, initially it will be difficult to fall asleep in many naps in a row, as on any other polyphasic schedules for beginners/non-nappers. Then, this would increase the chance to oversleep in the late nap in the day, or the core sleep the following day(s). Despite having 20 m of extra sleep compared to E4, the extra nap only serves to somewhat provide more alertness, and as adaptation progresses, this extra nap can become a liability (an extra opportunity for a nasty SWS wake). Any oversleeps would endanger the adaptation in a much greater magnitude than on schedules with higher total sleep, because it is mandatory to overcome the equilibrium of SWS and REM sleep in each sleep block to be able to adapt.

For the most part, E5 adaptation is similar to E4, if not more intense. Even though Puredoxyk suggested that this Everyman variant is possible, she actually never attempted it. Adaptations to this schedule since then are also extremely rare, and no one has ever been able to adapt to it. All attempts were swiftly blown by the intensified sleep pressure from the schedule, and oversleeps uncontrollably tear the schedule apart. For this reason, it may be better to stay on E5 for a short amount of time, before making an immediate transition to Uberman (fast adaptation), to limit as much built-up sleep deprivation as possible. However, no successful Uberman sleepers are known to have transitioned from E5 either.

Like any other schedules below the minimum sleep threshold, E5 also poses long-term health issues, potentially. It is also largely unknown if E5 will ever gather the needed amounts of attempts due to its highly constrained scheduling. One small niche that it can offer, like DC4, is that one can choose to have a short core sleep for some SWS, and then enjoy the several naps on E5 as a way to learn to nap effectively. This can be considered a less extreme Naptation version, which allows for certain leeway in conserving some amount of daytime productivity. The core sleep with some SWS can help consolidate memory and power up overall performance better than skipping sleep entirely. In an emergency that requires a significant sleep cut, E5 can be used as a temporary schedule with several naps to boost alertness. The short naps have their advantage of being easier to fit into a daily schedule, and allow sustained operations where no core sleeps can be scheduled. 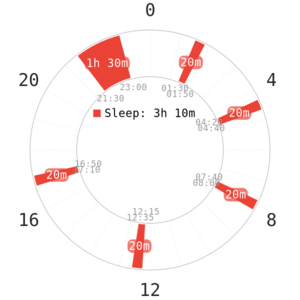