Age is one of the major considerations in deciding on a polyphasic schedule. In particular, younger people are advised to avoid cutting too much sleep, as their brains could still developing and cutting sleep could detrimentally affect this process. 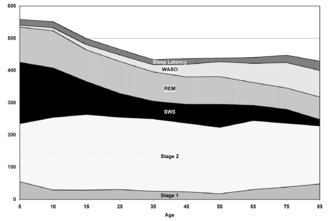 Sleep baseline by age and stage

Younger people, particularly those under the ages of 16-20, have substantially higher sleep requirements than older adults. More specifically, they have a higher requirement of vital sleep stages (SWS and REM), which in general cannot be cut.

Moreover, light sleep, particularly the sleep spindles prominent in NREM2, has been suggested to play a role in brain development.[1] Cutting light sleep via polyphasic adaptation could do harm this process and impair cognitive development.

Disclaimer: These values are based on community experience and do not constitute medical advice. You are responsible for your own health and well-being.

In addition to health concerns, it is also important to note that cutting sleep is simply more difficult for younger individuals with higher baselines. While an adult might be able to handle E3 or DC2 relatively well as they are able to fulfill all of their vital sleep needs into the available sleep time in those schedules, a 15-year-old would not, as their sleep requirements will barely, if at all, fit into the total sleep on these.

Also, note that these values are for typical sleepers, and the exact values will differ based on your individual needs. The best way to determine your vital stage needs is by measuring a baseline with an EEG. With this information, you can be more informed about what schedules you should and should not try.

Uncooperative parents can interfere with your adaptation to a schedule in many different ways, including but not limited to:

Parents are often concerned that polyphasic sleep is unhealthy. However, there is strong evidence suggesting that prior to the advent of electric lighting, humans often slept biphasically, often in a pattern resembling Segmented. Taking daytime naps have also been found to have health benefits.

Sleep patterns, other than monophasic or simple biphasic ones, which closely resemble monophasic. There are very few studies on other schedules, so it is often claimed that an uninterrupted long sleep blok at night, possibly supplemented with a short daytime nap, is the healthiest schedule[2].

One way to convince parents would be sharing literature related to polyphasic sleep. The most useful search phrase is "segmented sleep". This should be enough to suggest that splitted sleep is natural and healthy. This will also show your knowledge about the subject of sleep, which can help you gain their trust.

Alternatively, you can cite existing sleep issues, especially insomnia and tiredness in the day, as a reason to experiment with sleep. By framing polyphasic sleep as a way to solve sleep issues, they may also be more open to it. You can also say that the experiment is only temporary, and then say that it feels better than before if adaptation succeeds.

School can also pose a problem. Depending on the region, school may last for long hours, during which napping may not be possible. Unlike other work obligations, school often starts relatively early, which can make it difficult to schedule a morning nap.

School can also be excruciatingly boring for some, which may cause frequent microsleeps during adaptation. This can affect your performance at school. If reported by teachers, your parents may intervene to stop your adapation. If it is possible, participating more in class discussions may help with staying awake. Alternatively, exposure to cold water or chewing mints can also help.

Possible napping spots include anywhere that you can stay relatively undisturbed. Using earplugs may be necessary depending on the environment. In that case, having a vibrating alarm can be useful. The most common place to nap is personal desks. Some libraries may also offer a quiet place to nap. Depending on the climate, napping on outdoor benches may be possible. If desperate, toilets can also be used as emergency nap spots, though there is a risk of appearing like a medical emergency.


Cite error: <ref> tag with name "bbc2012" defined in <references> is not used in prior text.
Retrieved from "https://polysleep.org/w/index.php?title=Age&oldid=8674"
Categories: