With 2 core sleeps placed around the peaks and 2 naps in the day, DC2 is similar to E3-extended in timings, except that the first nap of E3 is replaced with a core.

The first core should ideally contain nearly all the required SWS, while the second core should contain primarily REM sleep. The naps help sustain wakefulness with reduced total sleep time, and may or may not contain REM sleep.

The total sleep is relatively high, and may allow for flexing after adaptation. Compared to E2, which has a similar total sleep, the split cores may allow for more efficient sleep. Four sleeps per day keeps sleep pressure relatively low, and skipping naps would be more tolerable compared to schedules like E2, as long as this does not happen often.

Either cold turkey or gradual adaptation to DC2 is possible. After adapting to DC2, one can start flexing the naps and possibly core(s) and adapt to Ducamayl, or transition to DC3. The first core sleep may also naturally shorten to about 2.5h as a result of compressed repartitioning and high frequency of sleep.

In spite of the four scheduled sleeps, DC2 can be a viable schedule for many, because of its ability to become flexible after adaptation. The first nap can be taken during a noon or lunch break and the second nap can be taken after work (16-17:30). It is then possible to sustain 2 naps per day, with a consistent work schedules on weekdays for example.

DC2 also allows for some physical exercise since it has a relatively high total time in cores. Both cores may feel long and restful after adaptation, despite the relatively short durations compared to monophasic sleep. DC2 provides many alertness boosts, replenishing energy in the morning, at noon, and in the afternoon.

However, it may be difficult to both take a nap and have lunch with a relatively short lunch break. As with other Dual core schedules, the first core starts relatively early, and may pose difficulties with social life. Non-natural segmented sleepers may experience boredom during the night gap, which can make adaptation more difficult. 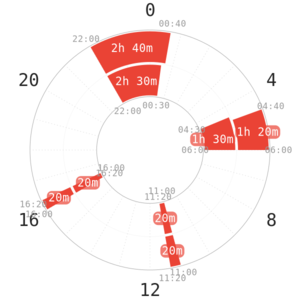 The inner ring is the original variant of the schedule proposed by Polyphasic Society, which cuts more sleep than the current standard variant. Totaling 4h40m of sleep, this version has a similar amount of total sleep to E3 (3.5-hour core). However, scheduling a 2.5h first core may result in heavy SWS wakes in the beginning and cause oversleeping. This reduced total sleep may also make this variant less flexible after adaptation. Throughout the years, this variant has seen little success, but those with slightly reduced monophasic sleep requirements may be able to adapt to it more easily.

It may also be possible to compress the cycle lengths down to 80 minutes. The common approach would be to adapt to the standard variant, and then wait for the compression to occur. It is not recommended to directly start an adaptation to a variant. 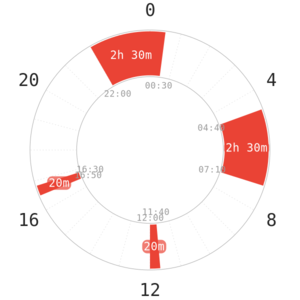 This DC2 variant offers slightly more time in cores, with both core sleeps being 2.5 hours. Only one success has been documented with this variant so far, however. This schedule prepares one for Ducamayl, in which both cores are flexible. Because of the 2.5h core duration, beginners should avoid this variant.

An easier way to schedule a similar amount of sleep duration for both cores is to have 3.5h and 1.5h cores, both of which being more common core lengths. Once adaptation is complete, it may also be possible to flex both core sleeps. 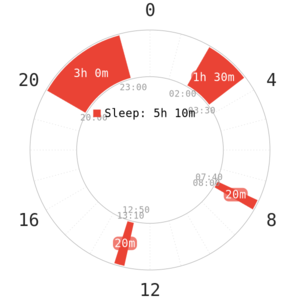 A DC2 variant with the first nap around dawn

This variant rotates the whole schedule backward to earlier hours. The goal of this is to place 3 sleep blocks at night, leaving only one nap in the day. The core gap also becomes shorter. The first nap is placed in the morning, resembling an Everyman schedule. The first core will likely cover most of the SWS, while the second core may be mixed (containing both SWS and REM, but likely more REM sleep). Both naps are more likely to contain REM sleep, which can boost dream recall.

In this variant, the first nap can also be extended to become a pronap (30-40m) to better sustain wakefulness and provide more REM sleep. However, this variant has not been tested, with the obvious issue of the early first core conflicting with daily life for most people. 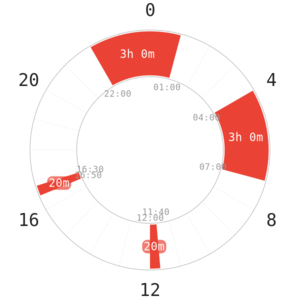 The second core can be extended to a 3h sleep. People with high sleep requirements (especially in both REM sleep and SWS) may benefit from the extra sleep. The first core can also be delayed, starting possibly at midnight. However, DC2-extended has seen very few attempts, and virtually no success. DC1-extended and E2-extended are recommended instead, as both are easier to schedule, and likely no more difficult to adapt to. 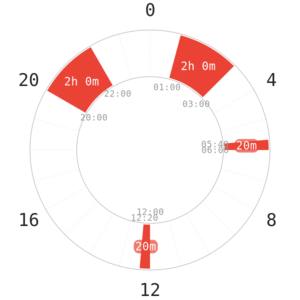 A DC2 variant with TC1 structure

This is an experimental variant proposed by Sekvanto. Both cores are 2 hours long and placed early so that the first nap can be placed in the morning. The second nap is placed around midday. This resembles TC1, replacing one of the cores with a nap while extending the other cores. The dawn nap may increase dream recall. This variant has only one daytime nap, which may make it more convenient for some. Nonetheless, the early first core may pose an issue.

Note that 2h cores are uncommon, as they are not a multiple of a typical cycle length and may induce difficult mid-cycle REM sleep or SWS wakes. This variant also contains less sleep than the standard, which may make it more difficult. Not many attempts have been made, and there has been few successes.