A non-reducing schedule is a schedule, which does not significantly reduce total sleep time compared to a one's monophasic baseline. Having little sleep reduction, these schedules offer other advantages. Compared to monophasic, these schedules offer continuous refreshment throughout the day and help to maintain high alertness. Compared to reducing schedules, they offer flexibility from the very beginning and a very mild adaptation.

Standard biphasic schedules reduce relatively little sleep; nevertheless, they are not non-reducing for a person with an average monophasic baseline of around 8 hours.

Biphasic sleep has been widely used historically, including Segmented and schedules falling in between E1 and Siesta, in which which is supplied with a short nap / core midday. However, all of the schedules practiced are believed to not be strictly timed, as the clock is a recent invention. It is also believed that these schedules have been non-reducing, which allows this form of flexibility and resilience. 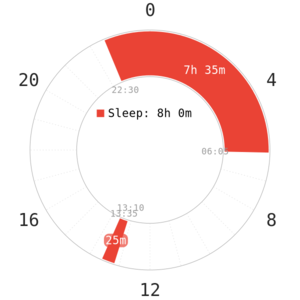 As a non-reducing biphasic schedule, this E1 provides much flexibility. The nap can be anywhere between ~10 and ~40 minutes. The nap duration can change from day to day, and can start at different times each day if desired. Similarly, the core duration is not fixed and sleepers should rely on natural wakes for it. This scheduling variant can be slightly flexible even in adaptation (it is recommended that the core should not be more flexible than an 2-hour window when first adapting, to keep the circadian rhythm consistent).

Due to the flexible nature of the nap, it is necessary for sleepers to recognize the time they are naturally tired or drowsy in the day to place the nap accordingly; if the one's work schedule does not allow for a large range of nap time, then a smaller nap window can be chosen. Most importantly in this variant, late naps (after ~17-18) should be avoided because it may interfere with the core at night, which is more likely than on standard E1 as the total sleep time is higher.

Recently, there has been more success of this variant in teenagers, as a safe and easy way to start polyphasic sleeping and learn napping. This can serve as a groundwork to more easily adapt to a reducing schedule later. Compared to a non-reducing Siesta, the short daytime nap is very easy to schedule around meal times and social events, and is usually short enough to avoid being interrupted by daytime activities. 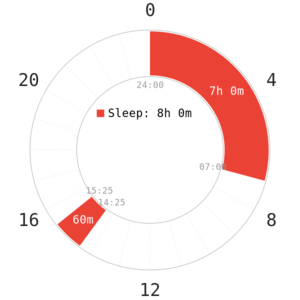 Under a non-reducing schedule, it can be natural to wake up after 60m on Siesta. The mechanism of this schedule likely resembles that of non-reducing E1. Without repartitioning, all sleep cycles follow the regular order of NREM1, NREM2, SWS, NREM2 and finally REM sleep. Since little vital sleep has been removed, the body naturally wakes up before reaching REM. 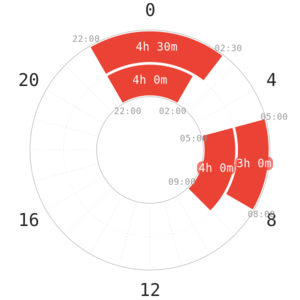 The difference between Segmented-extended and non-reducing Segmented is that the former has a fixed duration and can reduce some sleep for long sleepers, whereas the latter aims not to reduce any sleep (e.g, 4.5-4.5h cores for a 9-hour sleeper). The non-reducing variant is believed to resemble the historical sleep pattern in pre-industrial Europe. Both variants, however, occupy much of the evening and the morning, which can clash with social commitments.

Compared to the default or other reducing variants, these two allow for some flexibility of either core, even during adaptation, and naturally segmented sleepers can adapt to the schedule by simply follow their natural patterns of tiredness. One success from the non-reducing variant (~6.5h total sleep on average) has the first core being ~4.5h long consistently while the second core hovers around 2h. This suggests that non-reducing variants can still be utilized by short sleepers to achieve a flexible Segmented schedule. However, without reducing total sleep, it is expected that it will be significantly harder to fall asleep for those who are not naturally segmented sleepers, which may contribute to the difficulty of the adaptation.

BiphasicX is a flexible non-reducing schedule, which can be a combination of all the biphasic schedules. 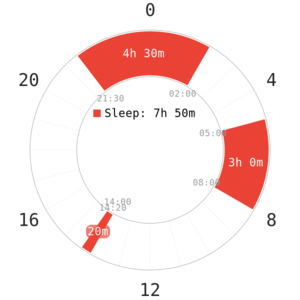 Because DC1 is heavily built on the Segmented sleep habits, naturally Segmented (non-reducing) individuals can learn to add a daytime nap around the hours they are drowsy. This would effectively create a non-reducing DC1 variant. Despite this, adaptation success is very rare, and mostly rely on the naturally Segmented tendency coupled with the circadian nadir around noon-afternoon to take the nap accordingly. It may also be redundant to a lot of people, because non-reducing Segmented already provides all the necessary sleep in the cores, and does not require taking any daytime naps.

However, a slight benefit from doing this variant is to start to learn to have effective daytime naps to further transition to other reducing schedules/variants, because Segmented sleep does not teach napping skills. Even so, with the overall much lower sleep pressure on a non-reducing schedule, it may still be a tough task to fall asleep in the nap. 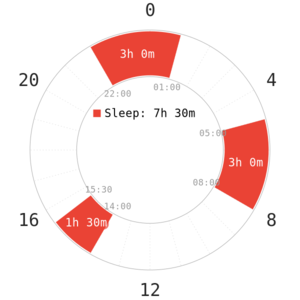 Non-reducing Triphasic often may fit people with a natural tendency to Segmented, who are unable to get enough sleep at night, often because of frequent WASOs or being unable to go to sleep early and wake up late, thus having a need to cut the second core, which would make Segmented sleep reducing. Adding a core during the day would have a similar mechanism to Siesta.

For sleepers without an affinity for Segmented sleep, a method to achieve non-reducing Triphasic is to use alarms both for the first and the second core, making total sleep time at night reduced compared to their monophasic baseline. The core midday can then have a natural wake without using alarms. 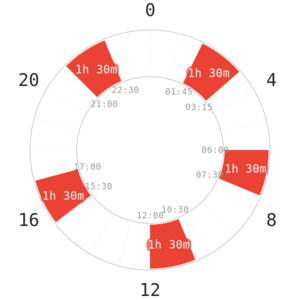 Experimental schedules consisting of several short cores, such as QC0 (4 cores) and PC0 (5 cores), can also be used to create non-reducing schedules.

Both schedules have very few known successful attempts, such as Cristiano Ronaldo[1], a famous footballer, and GeneralNguyen[2], an active member of the polyphasic sleep community.

Dividing the monophasic core into several cores can be beneficial for intense exercising schedule, since the refreshment from sleep can be met more often. Also, there is a benefit for those, who need to be socially available throughout different hours during the day, or simply to make a sleep structure more exotic.

Non-reducing schedules are recommended to underaged people, people who prefer to have a very flexible sleep schedule, or those who do not see a need for extra time awake. They are also a viable variant of recovery on instead of the usual monophasic recovery.

People with a hectic lifestyle might also find non-reducing schedules to be their only options in polyphasic sleeping, if they don't have enough time or consistency in life for the adaptation to a strict reducing schedule.