This schedule is considered experimental as it is only recently invented, and there have not been a large number of documented successes. Beginners are advised to choose a more established schedule.

QC0, or Quad core 0, is a schedule containing four short core sleeps[1]. So far, it is the only tried-and-successful schedule in the experimental Quad core schedule line.

The schedule was briefly mentioned in the Ubersleep book by Puredoxyk as an “Alternate Segmented” variant[2]. However, there was no adaptation success reported until 2020. Little scheduling details were mentioned in the book. There have been sporadic attempts over the years, but with limited success.

The default QC0 scheduling places 3 core sleeps during the night and early morning hours to avoid daytime cores, for convenience. The timing and role of the daytime core resembles that of Siesta, dividing the daytime wake gap into two halves. The first (evening) core sleep is mainly filled with SWS, whereas the morning one contains much more REM. The remaining two cores, one at night and one in the day, contain mixed sleep stages and likely more light sleep. Because of the segmentation into multiple small core sleeps, sleep repartitioning and sleep cycle compression is expected to be more intense than on schedules with longer sleep blocks. SWS deprivation symptoms are less apparent on this schedule than on Triphasic or any other schedules with lower sleep totals.

As adaptation progresses, difficult wakes may occur, especially in the nighttime core sleeps around the SWS peak, but also in the morning around REM peak. Theoretically, the adaptation first starts with SWS getting into all core sleeps, and REM deprivation ensues. As REM pressure builds up, both SWS and REM will be repartitioned into each core sleep, and finally an equilibrium is reached when waking up from all core sleeps is refreshing and energy level throughout the day becomes stable. A core near or at sunrise hours will contain predominantly REM, while a core around SWS peak hours will heavily favor SWS. As such, QC0 also possesses the characteristics of Dual Core sleep, and may be easier for those who are naturally Segmented sleepers.

After adapting to QC0, one can proceed to transition to Camayl, which is a highly flexible schedule with the ability to sleep in short cores around the day.

Despite it appearing to be an easier version of Triphasic with an extra core, many reported significant difficulty falling asleep in some sleep blocks when adaptation first begins. As time goes by, it then becomes increasingly difficult to wake up from the cores. This may be due to the distribution of sleep blocks, which keeps homeostatic pressure relatively low.

After lying awake for more than about 20 to 30 minutes, one should wake up and wait for the next core sleep rather than continue trying to fall asleep. Failure to fall asleep relatively soon will result in mid-cycle wakes, which makes adaptation to QC0 very challenging, in a different way from most other schedules. Beginners should particularly avoid this schedule, as experienced polyphasic sleepers tend to fall asleep more easily. Meditation can also be used as a way to faciliate sleep onset.

QC0 is most suitable for those who have near total control of their own time, such as those who work from home. Individuals with higher sleep requirements may find it easier to have adequate sleep pressure to fall asleep in all 4 cores. With the relatively high total sleep, it also allows intense physical exercise. 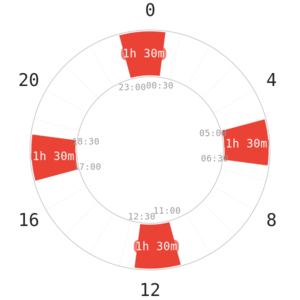 It is also possible to schedule QC0 equidistantly, which resembles Dymaxion, but with cores instead of naps. This may facilitate falling asleep, as the sleeps are evenly spead, rather than being packed at night. However, this distribution has no known successes so far.