Triphasic is the original and most popular Tri core schedule, which consists of 3 core sleeps and no naps.

Leif Weaver proposed the schedule, adapted to it, and stayed on the schedule for several months.[1]

The cores are usually placed equidistantly, with a 6.5h wake gap between each. However, equidistant scheduling is not required. Still, it is recommended to avoid having any wake gaps larger than 8 hours. The largest gap that has been adapted to so far is 9 hours between the daytime and evening cores. Other gaps are expected to be smaller, as sleep pressure is higher at night and in the morning.

In the beginning, sleep cycles will proceed as normal. The cycle first starts with light sleep, then reaches SWS and then finally finishes after REM sleep is complete. In the second core, SWS pressure may be weaker than REM pressure, allowing for some REM sleep to get in this core.

As adaptation progresses, both SWS and REM deprivation symptoms are likely to manifest as the schedule significantly reduces total sleep compared to monophasic. Vital sleep needs to be repartitioned into each core sleep according to the homeostatic and circadian pressures.

During adaptation, the first core will be difficult to wake from, because of possible SWS wakes, which may result in oversleeps. Likewise, the second core may also be difficult, particularly when REM deprivation has accumulated to high levels. The daytime core is likely the easiest to handle, and may naturally shorten after adaptation.

The adaptation difficulty for triphasic (non-extended) is "very hard" due to its low total sleep and only having a one-cycle core in the SWS peak. It is significantly harder than E3, due to the need to split SWS over several cores as well as its longer gaps.

Because of Triphasic's daytime and evening cores at often inconvenient hours, Triphasic is not very popular. The need for a core in SWS peak makes social life in the evening difficult. As it only has 4.5 hours of total sleep, Triphasic is quite inflexible even after adaptation for average sleepers. One person has reported being able to flex a Triphasic core by up to 30 minutes. With the limited flexibility, maintaining Triphasic long-term is difficult, even if the adaptation is successful. Intense exercise may also be detrimental to the schedule, because the increased SWS requirements from the exercise can lead to SWS wakes, and may cause oversleeps. Triphasic can create a sense of long days blurred together, with wake gaps all similar in length.

Triphasic-extended, however, is much more practical in this aspect. Since the first core can start later, social events in the evening become possible. More sleep also allows for more physical training and flexibility after adaptation. The long morning-afternoon wake gap allows for many different daily activities without having to worry about sleep. Triphasic-extended has reported more successes.

Aside from the non-equidistant Triphasic scheduling which has proven to be viable by a couple of sleepers, the most popular and widely successful version is the extended version. 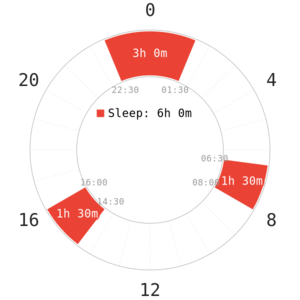 The extended version allows more room for SWS in the first core, which greatly eases adaptation. This also increases the total sleep time to 6h.

A few have adapted to a Triphasic-extended variant with a 9-10h wake gap from morning to afternoon. This makes daily activity scheduling much easier, in which the daytime core can be moved to ~16-17. The shorter gap between the evening and morning cores resembles Segmented core gap and can be utilized for various activities. The first core can begin later, up to around 23:00 thanks to the increased total sleep. The core extension also suits individuals with higher sleep requirements, for whom adapting to regular Triphasic may be impossible.

Alternatively, it may be possible to extend the morning core to 3h, which may allow for even more social events. However, this variant has no known successes to date. A sleeper with low SWS needs and high REM needs may find this variant easier.