E1 is the first schedule in the Everyman line, which contains a long core, usually with a length of 6 hours, and a short nap. However, E1 is mostly known as a biphasic schedule, rather than an Everyman schedule because it only has two sleeps, and the overall mechanism resembles Siesta.[1]

E1 was first created as part of the Formula by Puredoxyk in her book Ubersleep, as the schedule closest to monophasic of the Everyman schedule line. It can be viewed as a variant of the traditional napping pattern in many cultures, though the nap is usually longer in those circumstances (perhaps more similar to Siesta). Today, it is one of the most commonly recommended schedules to beginners.

Everyman 1, or E1, is part Everyman and part Biphasic, it trades one cycle from monophasic for a single nap in the day. Because of the sleep cut from the core, sleep deprivation will gradually build up, and enable sleepers to eventually fall asleep in the nap. This process is likely a lot easier than learning to nap on a non-reduced Biphasic schedule (i.e., Biphasic-X), because there is more sleep pressure generated from a shortened nocturnal core sleep.

It was originally thought that the nap on E1 should primarily contain REM to ensure a successful adaptation. However, according to the Polyphasic Survey 2018[2], only 50% of adapted E1 sleepers managed to get REM in their nap. This shows that the afternoon nap is not guaranteed to deliver REM sleep. Based on the data above, it still seems possible to complete the adaptation to E1 with no REM in the nap. This is likely a result of those adaptees covering their REM need by their core, leaving their nap as just wakefulness sustainment.

Since E1 provides a relatively high amount of sleep, transition to this schedule from monophasic sleep is recommended to be done straight from monophasic (i.e., cold turkey). However, unlike other polyphasic schedules with less total sleep, learning to nap on E1 may take up to several weeks because humans have been observed to get used to sleeping monophasically for only 6 hours per night, sometimes for extended periods. Thus, it may take time for sleep pressure to build enough to induce sleep in naps. However, experienced nappers or those with high natural ability to fall asleep may still be able to fall asleep for the nap within a few days, or even right away in a few cases, albeit likely with high sleep onset.

Adaptation to E1 follows the same rules as any other reducing polyphasic schedules: it is necessary to go to sleep at the same time everyday for the nap and the core for the new sleep habits to stick. However, when the total sleep on E1 (6.3h) is very close to a personal monophasic baseline, the schedule can be more flexible right from the start.

Even though E1 looks like it would be an easy schedule for beginners and non-nappers, the adaptation results in the community over the years do not reflect this. There have been many reported problems from beginners over the course of adaptations that prevented them from reaching the adapted state:

Most of these issues, however, can be attributed to sleep debt prior to starting E1 adaptation, poor discipline, poor alarm system, or underestimation of personal monophasic sleep need.

It is worth noting that the failure to nap after several weeks (despite adhering to the schedule by the minute and all methods have been used to facilitate napping) may be attributed to the BRAC in scheduling. Since sleep pressure on E1 is generally lower than on other schedules with less total sleep, ideal nap times in which the body feel drowsiness are only at a few certain spots in the day. This can cause the nap to work poorly because the body only tired either before or after nap. The problem would be resolved if the nap is moved to those spots.

Another regularly encountered issue is the rather common stage 3/4 loop for beginners. This typically happens when a sleeper cannot complete the adaptation and get stuck in Stage 4 where, near the end of adaptation, the sleeper feels inconsistently adapted, excessively tired at certain times of the day, or sleep inertia upon wakes. Because E1 likely has sufficient total sleep to gain all the needed SWS, being trapped in Stage 4 may be due to a slight REM deficit. A potential method to address this issue has been proposed, covered in 6.5h core variant section.

The average time it takes to adapt to E1 is anywhere between 4 and 10 weeks. The 10 weeks upper boundary is significantly higher than with many other schedules, because the process of repartitioning is slower on E1 than on many other schedules. As such, with all the available information, E1's difficulty has been adjusted to Moderate from Easy to reflect a more accurate picture of this adaptation.

After adapting to E1, it is possible to proceed to E2 and E3 as parts of the Everyman gradual adaptation route.

Since E1 is overall a viable schedule to prepare polyphasic sleepers for more advanced schedules with the necessary napping skills to master the daytime nap, it does benefit a vast range of lifestyles. The biphasic nature of E1 allows for long wake gaps between the nap and the core, and the nap can be fit into a many daily schedules, including mainstream 9-to-5 jobs. The nap can also be scheduled around noon in between any breaks or after work. Because of the short nap duration, it becomes possible to sustain the schedule long term, as the nap is not as long as a core (at least 90m), and as a result, it is less likely to be interrupted by daytime commitments. After adaptation, the nap window can be up to 4 hours with standard E1, and potentially wider with extended variants of the schedule.

With the common trend to schedule the E1 core at 11 PM or around midnight (with good management of dark period, food and exercise), E1 offers great versatility in scheduling. Many variants have been attempted, and some have succeeded and even been maintained for an extended period of time (at least 6 months). 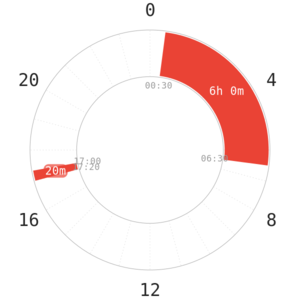 E1 with a nap after work

For 9-to-5 occupations that do not allow any naps during lunch breaks, it is possible to schedule this E1 variant with a nap after work (~4-5 PM) and a core around midnight or slightly later, with a dark period 2h before the core. However, there has been less success with this E1 variant, because the late nap has a low chance to contain REM sleep, being in late afternoon and closer to SWS peak. This can make adaptation harder than the default variant. The long wake gap before the nap can cause bouts of tiredness during adaptation. 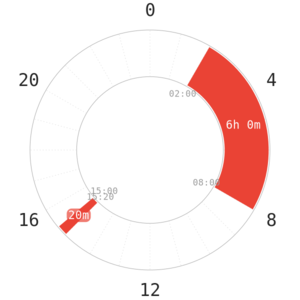 E1 with a late core

Another viable alternate variant with some success is a late core. Sleepers with less SWS requirement and somewhat higher REM requirement may benefit from this scheduling, as some hours of the core now lie in REM peak, which will boost the amount of REM gained during these morning hours. Night owls or those who prefer some social time in the evening may also benefit from this variant. The nap can be placed ~6-7h after the core like in the default variant, or later, but should not be too late into the day (6 PM or later). 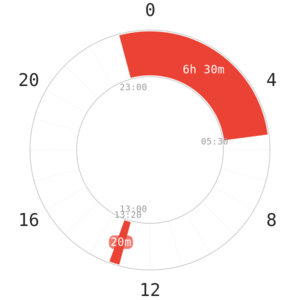 Recently, this 6.5 hour core variant has been proposed[3] and has been showing promising results, though only few sleepers have attempted this variant. With the idea that SWS mostly occurs in the first half of the night and REM dominates the second half after the 6h mark (which is the end of the default E1 core), there should be very little SWS by the 6.5 hour mark. This will allow for more REM sleep and/or NREM2 in the core, which may boost alertness and provide a better opportunity to match personal REM baseline on monophasic.

Individuals with slightly higher REM sleep than usual (>100m each day) can attempt this variant. Underaged people or those with higher overall sleep need can also pick this variant for a closer total sleep to recommended monophasic baseline. A 6.5h core is the middle ground between the more difficult 6h core and the lengthy 7.5h core which offers little sleep reduction. The nap on this variant can be scheduled later if desired, because the extra 30 minutes provide more alertness sustaining than a 6h core. However, like other variants, it should not be later than 5 PM. As it stands now, more data is still needed to validate this variant. 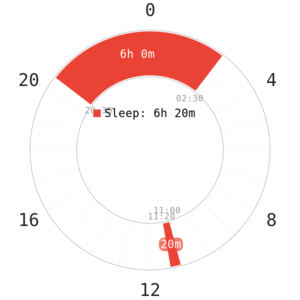 E1 with an early core

Those with a tendency to sleep early as a long-term habit can place the core around the late evening hours, initiating sleep time early (e.g. 20:00-21:00). The nap will then be shifted accordingly, earlier than the default version (e.g. 08:00-09:00). Sleepers with high SWS requirement can also utilize this distribution. The earlier nap can also give more REM sleep, being in the morning hours that are more likely to allow for REM sleep. 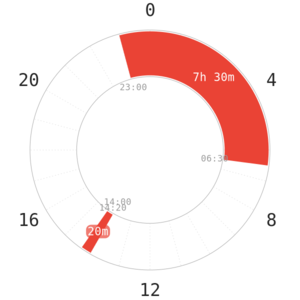 The extended version is the usual recommendation for sleepers who are younger than 16 years old, or people who have a highly physically active lifestyle, a high sleep requirement and/or scheduling constraints (e.g, long wake gap from 9 AM to 5 PM). For a 9-hour monophasic sleeper, this variant offers a decent amount of sleep reduction, requiring only one nap. With a lot of sleep in stock, the extended version allows for more versatility in the placement of nap times. Because most, if not all of the vital sleep stages should be covered by the core, the nap mostly serves to give an alertness boost to improve learning and memory. As a result, the nap may be placed in later hours of the day (e.g, 4-5:30 PM).

However, because of a high total sleep, it may take a long time to finally be able to fall asleep in the nap compared to standard E1. The adaptation to E1-extended may last just as long as the regular version, but with a much milder adaptation and possibly silent stage 3, with no signs of severe sleep deprivation symptoms or crippled productivity as seen on other more reducing schedules that has been observed in successful adaptations. Picking this variant as a result may give the benefit of potentially maximizing daily performances (physical and cognitive) at work and/or school even when adapting. 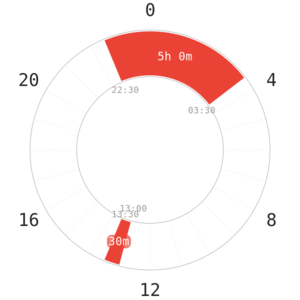 This variant has a shorter core, 5 hours or less, which usually consists of 3 sleep cycles. One of the most popular proposed forms is 5h + 30m. Similarly to Siesta, the 3-cycle core is extended to 5 hours, which allows to get more light sleep and REM for sustaining E1-shortened. The nap is extended to 30 minutes, which further increases total sleep time and should make the schedule more sustainable. This schedule is more difficult than the standard one, but might be possible for those with a lower sleep needs (~6-7h on mono).