Siesta is a biphasic schedule, which consists of a longer core at night and a shorter core during the day.

Throughout history, Siesta has been a very common sleeping pattern in Spain and many other countries around the world. However, it is most likely that humans naturally sleep in the non-reducing form of these schedules, meaning there is little to no sleep reduction involved, and with more flexible sleep timings.

Similar to E1, Siesta sleep takes advantage of the circadian dip around early afternoon. Siesta is considered to have 2 core sleeps, a long one at night and a short one in the day. In contrast to E1, the day core contains 1 full cycle, which is much more restorative than a short nap. The longer daytime sleep also allows for a shortened nocturnal sleep. Usually, the wake gap from the end of the night coreto the daytime core can be between 6-9 hours.

However, unlike most standard scheduling where a core sleep would make use of a multiple of the 90m sleep cycle, the standard reducing Siesta (6.5h total) utilizes a 5h core, because last 30 m is likely to contain extra REM sleep. Based on the typical human sleep structure, it is expected that SWS would be almost, if not fully covered in the first 3 full cycles of sleep (4.5h). On monophasic sleep, the REM cycles are often longer than 90 m, so the 30 m may also help with waking up after completed sleep cycles.

It is likely that during parts of adaptation, waking up from the core could be difficult because of SWS wakes (SWS repartitioning in progress) or REM wakes. Over time, waking up will become refreshing. The daytime core is usually reported to be less challenging to manage. However, for those unaccustomed to sleeping this long in the day, it could require learning and adjustment.

Over the years, Siesta has reported great success, with the majority being with the non-reduced version. However, the standard reducing version has less success, due to the need of an adaptation to reduced sleep. Overall, the adaptation is relatively mild. It could be easier than E1 in some cases. With good time management and a functional alarm setup, most individuals should be able to adapt to the reducing Siesta version.

Siesta sleep is overall a popular schedule, though it is significantly less popular than E1. First, managing a daytime core can be difficult, in comparison to the 20 minute nap on E1. However, recent trends of working from home or flexible school/work hours are making Siesta achievable for many. Another issue is that food time needs to be scheduled either right after the day core, or a few hours before it to ensure its quality. However, there is more leeway in scheduling meals with the daytime core on extended versions, as the total sleep time is higher. After adaptation, the whole schedule can become flexible by flexing one or both core sleeps with small increments.

Siesta (especially extended) is often done by athletes who perform intense exercises. Roger Federer and Usain Bolt are two of the many athletes who are known to habitually take a long sleep in the day. The day core provides recovery after an intense workout session, granting extra sleep time to meet the increased SWS requirement. It has been shown that after an endurance training session, SWS pressure rises and a daytime core allows SWS to be gained[1]. The occurrence of SWS in the long siesta is said to release the growth hormone (GH), which regulates glucose levels and glycogen storage, which often become depleted under intense exercise sessions.

On another note, Siesta-like sleep patterns is also known to be an adaptation of humans to diseases[2] (including chronic infectious diseases). Humans generally sleep more when severely sick, and often in a way resembling extended variants of Siesta, where both core sleeps are much longer than usual to allow for cognitive and physical recovery from sickness.

Over the years, many Siesta sleepers have adapted to non-standard variants, including alternative reducing ones. The timing of the core sleeps also reported mixed results. Beginners should also look through the differences in the alternate scheduling variations before choosing the desired one to attempt. 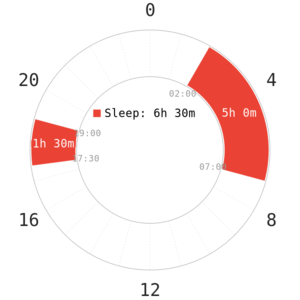 Over the years there a few successful attempts with this variant. The main idea behind this setup is to allow a longer wake gap in the day to suit 9-to-5 jobs. A sleeper would have a core at night, go to work, and then a long sleep block to rejuvenate after work. The advantages of this schedule includes time awake in the evening and night hours. For this reason, this variant can accommodate for many lifestyles.

Despite the advantages, adaptations to this variant are known to be harder than the default version, because shifting the main sleep away from the SWS peak will require management of food, exercise and lighting to ensure a sufficient amount of SWS. (See also: dark period) Those with lower SWS requirements will likely find this easier. The short core is pushed much later into the afternoon and early evening. This core may start as late as 19:30. Even so, however, it may be still be socially intrusive. 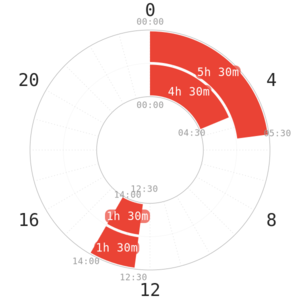 One individual has adapted to a 5.5h night core. Since this core length increase the likelihood of SWS wakes, the night core extension is preferred over this. However, it may benefit those with higher REM requirements. The additional 30m may also allow a longer gap between the morning wake and the daytime core.

The second Siesta variant with a 4.5h night core would line up with the 90m cycle scheduling rule. However, so far it has reported much less success than the standard version. People with slightly lower monophasic requirements (e.g, 7h) might be able to adapt to this variant. Note that after adapting to the default Siesta version, the night core may sometimes naturally shorten to 4.5h, but it does not happen very often. 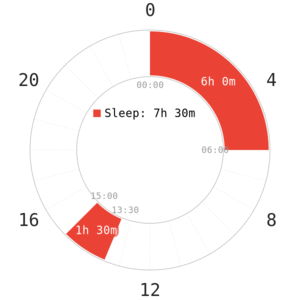 This variant also sees a lot of success, mostly in people with active lifestyles or are still growing. The adaptation is far easier than the default one, and the extended night core follows the 90m cycle rule. This still gives some sleep reduction for people with high monophasic needs. The most common form of scheduling this setup is to have a slightly longer core at night and keep the daytime core as it is. However, the night core can still be extended further, and the schedule becomes non-reducing (i.e. no sleep reduction from monophasic). An example would be a 6.5-7h night core, and a 90m daytime sleep for an individual with ~8-9h monophasic baseline. For those with a monophasic baseline similar to the total on this variant, it can be substantially more flexible, even during adaptation. 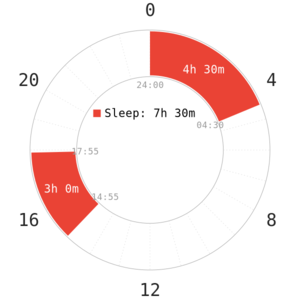 This variant, which resembles Segmented, has also seen some success. This is often done by those who work evening shifts. In this setup, the dark period should start 1.5-3h before the night core, and continue until ~1.5-2h after the night core to stabilize the circadian rhythm. This setup might require additional circadian management to keep the circadian rhythm stable, as the longer daytime core may cause the body to mistaken it for a nighttime sleep.