This schedule is considered experimental as it is only recently invented, and there have not been a large number of documented successes. Beginners are advised to choose a more established schedule.

Camayl is an experimental flexible schedule containing a number of short cores, derived from core-only schedules, usually QC0.[1] After adaptation, it becomes possible to take a short core throughout the day whenever is tired enough. The concept resembles Spamayl, but short cores are used in place of naps.

After adapting to a schedule with only short core sleeps (~90 minutes), the brain gradually becomes accustomed to the new sleep pattern and adjusts to the new reduced sleep total. It is then possible to start flexing the cores, which contain repartitioned SWS and REM sleep with minor reductions in sleep quality.

The number of core sleeps can vary on a day-to-day basis. Each core sleep helps provide the needed amount of SWS and REM sleep as well as maintain alertness.

The average number of cores on the schedule should stay close to that of the original base schedule. For example, those transitioning from QC0 should aim to take four cores per day. Sleep spacing should take into account natural periods of drowsiness and sleep peaks. It is easier to stay awake for longer periods in the day compared to the night, and as such the gaps in different times of day should be different in size.

A core sleep can be extended by one cycle once adapted to make up for a lost sleep; a short nap can be occasionally added to the schedule to replace a missing missing core after adapting, though recovery may be required afterwards. It is still important to ensure that sleeps are properly separated by at least 1.5-2 hours, to prevent interrupted cycles.

A consistent dark period should be employed to ensure the stability of the circadian rhythm and maintain sleep quality.

Similar to other flexible schedules, it is unlikely that one could adapt to this schedule cold turkey, and all attempts have failed so far. Thus, only currently known method that had led to success is by first adapting to a strict base schedule (usually QC0), and then gradually flex each sleep block incrementally.

Some time after adapting to the base schedule, one can start flexing. This can begin with moving 1-2 core sleeps at a time, 15-30 minutes away from the original sleep time. Then, the flexing range can be increased gradually, eventually having flexing windows several hours long. Each increase in flexibility will take time to adjust to, during which one may experience somewhat increased tiredness. It is recommended to avoid flexing multiple cores with big jumps all at once, as doing so can destabilise the schedule. 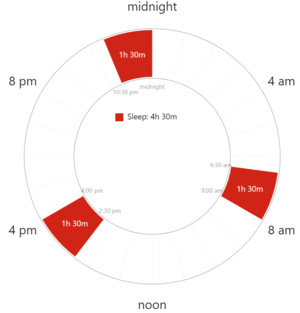 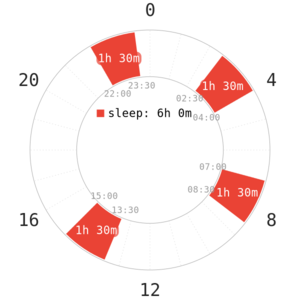 As the flexing range increases and alertness is restored to normal, it becomes possible to add and remove core sleeps, depending on one's level of tiredness, completing one's adaptation.

Adapting to this schedule requires a stable adaptation to a core only base schedule first and a flexing adaptation to said schedule later, both of which can take a long time and include many chances of failure. As such, despite the relatively high total sleep, Camayl is considered to be a Hard schedule..

Because of the long duration of the core sleeps, it can be rather difficult to fit into daily schedules. Camayl would work best for those who have near total control of their own time, such as those who are self-employed. For those with fixed working hours, the schedule may be undesirable, as the flexibility can be lost over time if not regularly used. In that case, a slightly flexible QC0 or Triphasic with slightly variable timings may be more suitable.

When travelling to different time zones or undergoing DST transitions, Camayl may be easier to maintain as the all core durations are equal. As with all other schedules, it is also necessary to schedule sleeps around meals and physical activities to ensure their quality. However, with its relatively high total sleep in the variant with four cores, Camayl provides buffer for increased SWS requirement during physical recovery from exercise. 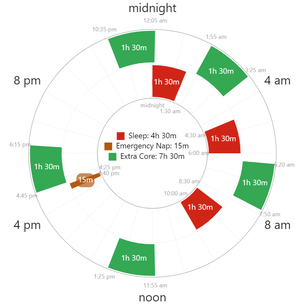 Durign emergencies in which taking a core is not possible, it is possible to use short naps (< 20 min) to temporarily maintain alertness, though the sleep debt accrued this way will need to be repaid later. Longer naps are best avoided, because the entrained short core habit may result in the nap having SOSWS or SOREM, which can cause difficult wakes. For recovery, an extra core can be added, or one of the cores can be extended by an extra cycle (~3 hours).

Though it may be more resilient than a regular QC0 and Triphasic schedule, it can still be destabilised by oversleeping in due to sickness, stress, or injuries. Extended time awake can trigger sleep deprivation, which can take several days to recover from, and may also destabilise the adaptation.