Segmented is a biphasic schedule with two cores at night, usually with a total sleep time close to one's personal monophasic baseline.

Segmented sleep, sometimes referred to as bifurcated or divided sleep, is one of the original polyphasic sleep patterns. It is the basis of the Dual core schedule line. In its non-reducing form, it is believed to have been practiced by some human societies since time immemorial until the advent of electric lighting . In short photoperiods (fewer daylight hours), it has been shown that human sleep is naturally segmented[1].

People would often go to bed some time after sunset, wake up after a few hours, stay awake for a couple hours, and then go back to bed until sunrise. Some naturally Segmented sleepers report interrupted monophasic sleep, where they wake up in the middle of the night. They are often suggested to adopt a Segmented sleep schedule.

The Polyphasic Discord Community has discovered some possible mechanics of Segmented sleep. The basis of Segmented sleep is the sleep peaks. During the early hours of the night (~21-24), when natural melatonin secretion starts, SWS can be gained efficiently. In EEG readings of adapted sleepers, the first core sleep is usually dense in SWS, whereas the second core sleep contains primarily REM sleep. The divided core sleeps are thus denser in vital sleep stages, and allow for a small cut in total sleep with stable sleep times. Naps in the day are often not required due to segmented's longer cores perserving light sleep in addition to the the nightly core gap reducing the amount of time awake between the cores during the day.

Both core sleeps are scheduled to be 3.5 hours by default. The sleep cycles likely lengthen to about 105 minutes from the approximately 90-minute cycles on monophasic sleep. This would also explain the viability of the schedule despite having fewer cycles. However, recently EEG readings of some members have shown the opposite.

The wake gap between each core (known as "core gap") should be at least 90 minutes, with a longer gap recommended (~2.5-3 hours) for non-natural Segmented sleepers. The reason for this is to prevent the cores from becoming interrupted sleep and to prevent the difficulties with falling asleep or being productive enough.

After Segmented, there is a gradual adaptation route to Dual core schedules, and also Triphasic, as the division of core sleeps had been learned.

The difficulty level of Segmented varies across individuals, and depends on the amount of sleep being scheduled. Overall, it is still considered a friendly schedule for beginners.

While the default dual 3.5 hour core variant has had the most success, a few other combinations are also feasible and have been adapted to in the past. Beginners can attempt these variants, with some precautions.

These are 2 modified variants that have reported some success over the years. Since the total sleep is only 6 hours, it may be suitable for those with slightly below average monophasic baselines (~7h). One problem with this schedule would be a circadian dip in the early afternoon hours, without naps to address them. Because more light sleep has been cut compared to the default variant, staying awake could be more difficult.

The wake gap between each core should be at least 4 hours to cover the SWS and REM peaks more efficiently, as well as to reduce the length of the day gap. The overall adaptation may be more difficult than the standard version because of reduced sleep time. The benefit is the added extra time at night, and only needing to sleep at night without daytime naps.

The difference between 4.5-1.5 and 3-3 core distribution is that those with more SWS requirements can attempt the former option, while those needing similar amounts of REM and SWS can pick the latter. Overall, the 3-3 variant better balances sleep stages, and has seen more success overall than the 4.5-1.5 variant.

It is also possible to extend this schedule, possibly to the point that it does not cut any sleep from one's monophasic baseline. This allows for an easy adaptation, while still gaining some of the benefits from Segmented sleep. These schedules may also benefit those with higher sleep needs (~9h on monophasic), younger sleepers, and those who regularly perform intense exercise. 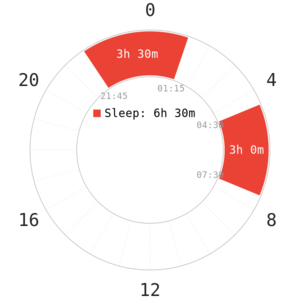 This variant, which is rarely attempted, has cores of slightly different lengths. These variants allows for slightly more time awake, may be easier to schedule, without a significantly harder adaptation. Other plausible combinations include 3-3.5, or even 4.5-2.5 and 5-1.5. It would be helpful to know the SWS and REM requirements before picking any of these variants, though.

Generally, variants with a longer first core allows for more alertness during core gap, and the second core does not need to be as long. However, the longer the first core, the less "DC-like" it becomes, meaning that the sleep stages becomes less distinctly allocated into the two cores. The longer first core may also resemble Siesta, with the second sleep looking like a daytime core sleep. 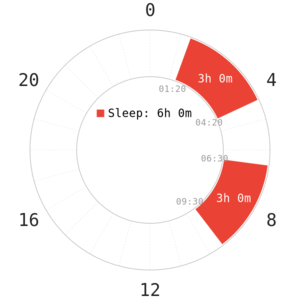 Segmented with a late first core

Sleepers who would schedule this variant are expected to have low SWS needs, and/or a lot of polyphasic experience as well as the stringent management of food, exercise and lighting. This variant is not usually recommended, as the first core being away from SWS peak drastically increases the difficulty. Circadian management is recommended, as with other late-core schedules.

For this variant, the core gap can be smaller than the default, because of the higher SWS pressure prior to core 2. 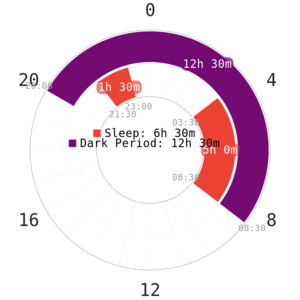 The idea behind this variant is similar to Siesta, but with both cores at night, and with the short core providing much of the SWS. Sleepers with lower SWS requirements or want to sleep less around evening hours can attempt this variant.

This variant has recorded at least 2 successes; one attempt was in a winter, where photoperiod was short. The first core becomes a lot shorter than usual, being reduced all the way to only 1 cycle, while the second core is much longer to compensate. Similar ideas can apply to 2.5-4.5 core distribution or so.

The main issue with this is that it is impossible for an average sleeper (90m SWS need) to gain all the needed SWS in the first core, the second core will have to provide the remaining SWS, and pushing the second core to late hours of the night may increase the difficulty of the process.

Similar to the default schedule, this variant also takes away some of the social time in the evening in exchange for time in the core gap. 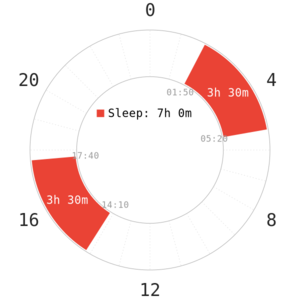 Alternatively, Segmented may be scheduled with one core at night and another core in the day. Only a few successes have been reported thus far. This variant looks like Siesta with a long daytime core, and both core sleeps miss the peaks. The dark period should be 2-3h before the night core, and continue for ~2h after it to stabilize the circadian rhythm.

Adaptations to this would be much more difficult than a regular Segmented schedule, because skipping both sleep peaks can greatly hinder sleep quality. Over the course of adaptation, staying awake during the graveyard and morning hours will be tough, and having a long sleep in the day may disrupt the circadian rhythm. 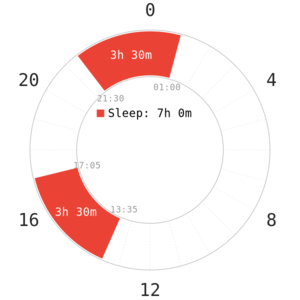 A Variant for Third Shift

The idea of this is to have both core sleeps after before work. Alternatively, the daytime core can be earlier so that it is shortly after work. Little is known about this scheduling variant, and adaptations have been overall unsuccessful, due to the large circadian rhythm shift it requires.

There have been several failed attempts Segmented sleep for shift work. This is expected, as overall rates of success are very low for shift workers.

Segmented, which allows for a range of schedule options, can be suitable for many. It greatly benefits those who naturally wake up during the night, and also allows those who are unable to take a daytime nap to still sleep polyphasically.

Before one transitions to Segmented, it is important to plan what to do during the core gap. Staying awake with few things to do while everyone else is sleeping can be difficult. For naturally segmented sleepers, this is less of a problem. Here are a few tips:

Advantages of Segmented over other schedules include: