</translate>A highly flexible nap-only schedule, the main idea of which is taking a short nap whenever tired throughout a day. Usually has a total sleep time close to 3 hours. <translate>

SPAMAYL is an abbreviation of “Sleep Polyphasically As Much As You Like”, one of the 4 "-AMAYL" polyphasic schedules. Originally proposed by Rasmus, who reportedly stayed on the schedule for 1.5 years, SPAMAYL is intended to be the first "-AMAYL" polyphasic schedule with hyper flexibility in sleep times, following the body's need for rest to place the naps accordingly. The original design of the schedule exclusively uses 20m naps. Recently, it is also sometimes referred to as U7 or U8 (Uberman with 7 or 8 naps).

The birth of this schedule eventually led to the creations of 3 other "-AMAYL" schedules, while the sleep principles still apply - sleep when tired enough. Another premise of the schedule is to hover around a somewhat consistent total sleep time from day to day, to ensure that the naps can become more stable and the pattern of tiredness can be more easily detected.

SPAMAYL fits those with self-employment, working from home, but is also possible for programming jobs, having stable daily schedules. For those who have gotten used to 20m naps, there is allegedly no limit in SPAMAYL’s flexibility. Another niche SPAMAYL can have is that individuals (with normal sleep requirements) who are in desperate need of extra wake time and flexibility of sleep times can practice SPAMAYL for a short time (e.g, a couple days, some weeks). Examples include new parents who need to spend a lot of wake time on watch for their babies, and the unpredictable events can make SPAMAYL a temporarily good candidate to attempt.

Under war or apocalyptic times where it is necessary to be on the move frequently and perform sustained operations under long periods of time without the possibility for any core sleeps (Chapter 14 of Why We Nap), SPAMAYL may become a very niche survival tool to at least hold on to for a short time (up to ~a couple weeks or so) until a settlement area is found. The flexibility of the schedule (including nap duration) invites more possibility for longer naps to be used to relieve more tiredness and sleep pressure. Getting some rest from naps (which become more effective over time) coupled with the adrenaline generated from the stressful situations can provide certain amount of needed vigilance in the event of severe emergencies to perform better decision-making than skipping sleep entirely. This flexibility also outclasses other nap-only schedules like Uberman, with a nap every X hours especially in the niche situations above. The goal is not to adapt to SPAMAYL under these circumstances, but to use it as a way to learn to increase the body's efficiency to squeeze the most rest possible from each shuteye session, while having to stay awake and perform demanding duties for a lot of hours in the day. The brief experience with this nap-only behavior may be tempting for certain motivations behind some personal sleep experiments, without having to worry about the pressure to have to adapt.

However, because of the nap only structure, it is important to remember that SPAMAYL may not fully support the glymphatic system's functions, which is a crucial aspect of well-being. Despite that the naps can be as long as ~60m, sleepers can still wake in SWS, interrupting the cycle as an abrupt wake. The overall intense sleep pressure to be alleviated by the naps poses a question of whether several bodily functions also have to change due to a long exposure to a sleep regime with no core sleeps. Physically active lifestyles and average sleepers most likely cannot stick to the mere 20m naps if their SPAMAYL only contains 20m naps. Exercise and nutrition also play an important role in affecting sleep architecture of each nap, thus it is necessary to closely monitor these factors as well. Regardless, the unpredictability and flexibility of the nap timing makes it difficult for the body to know what naps to insert REM and/or SWS, given that REM naps, SWS naps and mixed naps can occur at any hours in the day when they are taken. These characteristics makes SPAMAYL a very inhospitable schedule for most humans, so inexperienced or non-mutant polyphasic sleepers should not seek to adapt to this schedule and maintain it long-term.

Why does this schedule work?

The schedule is based on the entrainment of 20m naps, napping for 20m when one is tired enough. Since there are no core sleeps, all necessary SWS and REM must come from the naps. Like with Uberman and Dymaxion, an SWS nap can be experienced during the REM peak, and REM nap during SWS peak. Sleep pressure is usually huge since SWS and REM have to be repartitioned into all naps, and one cannot predict which sleep type each nap can have, due to the varied number of naps each day. However, SPAMAYL is less hostile than Uberman and Dymaxion, since it can allow more than 6 or 4 naps respectively, and the extra sleep from the extra naps will help accommodate sleep need more easily, allowing for extra REM and SWS gain. However, because the naps are being moved they will contain a lower amount of SWS or REM than the naps of strict nap-only schedules, thus requiring more naps to give the same total SWS and REM sleep. It is likely that only adults with genetically reduced sleep needs will be able to accomplish this type of sleeping pattern, due to the inefficiencies of inconsistent sleep times and the very low sleep total. Experienced nappers can also achieve a fast onset of REM or SWS in their nap, with precise timing of sleep.

Rasmus said he never felt tired and once he was tired enough he would lie down and take a 20m nap. Like other schedules, REM naps give huge boost to alertness and naps are usually very deep if they are well-timed, because the schedule doesn’t offer any core sleeps. However, it is also common to feel tired occasionally if a nap is ill-timed or if one has to stay awake for too long.

Overall, the alertness boost from the naps is enough to sustain alertness for the next hours. A nap can also be scheduled before or after a certain event comfortably, to ensure low chance for oversleeping as alertness starts to wane. Because the successful adaptations so far are from sleep mutants and heavy insomniacs, this section is written based on their anecdotes.

What variations of SPAMAYL actually work?

According to Rasmus, most naps are focused in the night, because it is usually harder to stay awake at night than during daytime. Adapted Discord user Charlaxy also reported the majority of naps at night after 8-10pm through early morning before 7am. Usually, nighttime naps allow for SWS gain and make sure one gets some night sleep, and limiting daytime naps to ensure that one can have a (reasonably) comfortable social life. 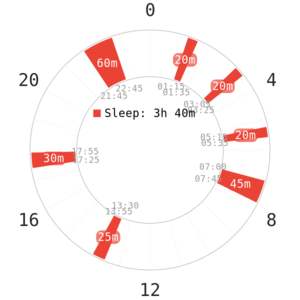 Up to date, there has been more adaptation success to SPAMAYL, especially with the use of longer naps. It is worth noting that "-AMAYL" polyphasic schedules are not made to be confined to a specific sleep duration all the time, and SPAMAYL is no exception. Any sleep duration can be lengthened, as long as it remains a nap. In the above demo example, a nap can last for as long as 60m, and longer naps around dawn (simulating a Pronap) can be taken advantage of before work to limit the amount of naps during the morning work hours.

The reason why such nap lengths can work is largely attributed to the perpetually fragmented sleep in the case of insomniac individuals, who cannot sleep for longer than a couple minutes in one go. It is then possible to start waking up, staying awake after a given nap duration, and wait until they are sleepy enough for the next sleep. As a result, their ever-changing nap durations persist from day to day, allowing each nap to also change accordingly from day to day, or occasionally. The versatility in such nap duration, however, is only viable for individuals with very reduced sleep duration.

The above example serves to illustrate the position of a longer nap in SWS peak to ensure that more uninterrupted SWS goes into this nap, and other naps concentrated during graveyard hours to reduce the sleep pressure at nighttime. Because any naps can be changed in their duration, at any given time for any given day, there is practically no limit on how many SPAMAYL variants are viable for adapted sleepers.

What is the best adaptation strategy?

Because of the rare adaptations to SPAMAYL so far, the most natural method of adapting to this pattern is cold turkey, from adapted sleepers. Their drastically reduced sleep requirements enable them to sleep when tired, using their broken sleep as a result of insomnia or certain genetic factors to dictate sleep time and sleep around the clock. The adaptation first starts with sleep inertia and potentially low energy level in the day as a result of a change in sleep behavior with the multiple-nap regime. Once the body gets a hang of the napping habit, the naps become more refreshing and yield more vital sleep stages. As a result, it becomes possible to stay awake for a longer period of time before having to nap again, and eventually, the effects of drowsiness generated from delaying a nap occasionally can be recovered quickly. Having no core sleeps means that the naps on SPAMAYL can be forced to finally repartition REM and SWS into each nap, unlike those on "-AMAYL" schedules with a core sleep, whose adaptations always require a prior adaptation to a strict base schedule first.

According to Rasmus, “during adaptation one can go nap for 20m, wake up (and actually do things rather than just sitting in bed) for at least 20m and after at least 20m passed by, if one still feels sleepy they can go back to sleep for another 20m and rinse and repeat. However, this adaptation scheme by Rasmus is debatable in that humans usually need to stay awake for at least 90m (one full wake cycle) before sleeping again, otherwise the body will treat it as an interrupted core sleep. What is important is to make sure that you actually only take 20 minute naps and that you space them apart adequately, so that you’re actually being awake between them, which is a more sensible reasoning. The recommendation can therefore be made to not schedule the sleeps at a closer interval than 90 minutes between the naps.

Another approach to adapt to SPAMAYL would be through an adaptation to a schedule with strict sleep times, for example, Uberman with 7 or 8 naps. Then, the next step is to learn to flex the naps as part of the flexing adaptation, one or two naps at a time, and add more naps when alertness and productivity start to falter, to get used to the varying number of naps. While this approach looks viable, no one has successfully adapted to SPAMAYL with a gradual adaptation method, due to the immensely difficult adaptation to a nap-only schedule as the first step, let alone learning to flex sleep on a nap-only pattern.