Difference between revisions of "Tesla"

Tesla is an extreme schedule designed by Sharif Olorin in 2009 that combines parts of Uberman and Dymaxion. It consists of four equidistant 20 minute naps (one nap every 6 hours) and no cores, allowing for a total of merely 1 hour and 20 minutes of sleep a day. It is therefore referred to as U4 (Uberman with 4 naps) sometimes.

While Nikola Tesla was documented to sleep less than most people at night, he did not actually follow this polyphasic pattern. It got named after him by the creator. Here is what Sharif Olorin had to say about the naming:

“A friend of mine has recently switched from Dymaxion to the pattern I’m following. Now that I know of more than one success story with this pattern, I thought I’d better name it.

So I give you the Tesla pattern. Because a) Tesla’s awesome and b) Tesla’s one of the few people known to sleep almost as little as we polyphasers.”

Like other nap only schedules, all REM and SWS requirements must be supported by the naps. The sheer intensity of SWS and REM pressures is also known to be far more outrageous than that on other nap only schedules, because Tesla is the schedule with the least amount of sleep in the entire polyphasic sleep regime. Given that an average human needs at least 90m SWS and 90m REM each day, it becomes impossible to retain these important numbers on Tesla.

Ever since its creation, Tesla saw very few attempts, due to its unpopularity compared to that of Uberman and Dymaxion. Despite the rarity in adaptation attempts, Tesla was actually experimented on by certain sleep scientists and published in a sleep study. However, the schedule name (Tesla) was never used in this study.

It is also worth noting that Olorin and his friend only stayed adapted on Tesla for a very short period of time. Feeling of restfulness on nap-only schedules can be misleading due to sudden changes between restfulness and extreme tiredness. The ability for REM sleep to enter the naps (and can give intensely vivid dreams) can create a strong illusion of the refreshing feel after that nap. It is possible that the both of them mistook the prolonged feeling of restfulness for adaptation while, in fact, they were still in the adaptation phase. A typical 20m nap at first will grant the avoidance of SWS wakes for some time, but on Tesla, the soul-crushing sleep pressure will quickly place SWS at the end of each nap, resulting in abhorrent wakes from them.

Oher than the cold turkey approach, it may be possible to gradually adapt to Tesla, after one has completed an adaptation to Uberman, by cutting out 2 naps and slightly rotate the remaining 4 naps. However, no one has succeeded with this gradual adaptation method either.

In this study, Tesla schedule was used to evaluate experimenters' cognitive performance upon waking up from the naps (effects of sleep inertia) and then such results were compared to sleepers who stayed awake during the entire study (64 hours). It was found out that a number of naps on Tesla did contain both SWS and REM sleep, which reinforces the theoretical assumption that both of these vital sleep stages can be found in just 20m naps because of the insane levels of sleep deprivation. Initially, when adaptation first began, sleep onset of the naps averaged to be ~3.8 minutes, suggesting that an adaptation is required to facilitate napping habits as a cold turkey transition from monophasic sleep.

However, because the study did not last long enough, it is uncertain if this sleep onset values across the napping subjects would decrease drastically; even though this prediction is likely. Compared with other nap only schedules' experiences, it makes sense that an adapted sleeper would fall asleep within mere minutes, or even seconds on Tesla. If the adaptation is eventually possible, it would become clear that there is an equilibrium of REM-SWS ratio in each nap, and that each vital sleep stage can take over any nap (e.g, REM nap in the nap around midnight) similar to Uberman. It was also noted in the study that core body temperature, while at circadian trough (lowest, which is near sunrise hours) made the morning nap especially nightmarish to wake from. This also points to the recommendation that napping at nighttime is not as favorable as having core sleep(s) due to the high likelihood for dominant SWS sleep portion.

On the other hand, adaptation to Tesla is absolutely the most horrific experience for any average sleepers who would want to attempt it. From the same aforementioned study, the napping subjects quickly developed sleep aversion, a phenomenon that is explained in the study as the fear of sleeping. This is because the level of sleep inertia skyrocketed and became unbearable for them, to the point that they found the upcoming naps "objectionable". Two of the subjects felt ill, four of them quit because of the ghastly sleep inertia, and then all the remaining subjects quit the study before it ended.

Because not many adaptations to Tesla have been thoroughly logged, it is impossible to know how many Tesla versions could work, or if they are even possible at all. Non-equidistant scheduling of naps (e.g, 2 naps closer during night hours and 2 naps in the day have a bigger wake gap), slightly extending one or all the naps to ~25m remain largely hypothetical, if not outright impossible. Because Tesla has no core sleeps, it is highly questionable if a mere 20m nap could sustain wakefulness for a lot of hours when SWS pressure is not facilitated and can dominate any naps should it rise enough. 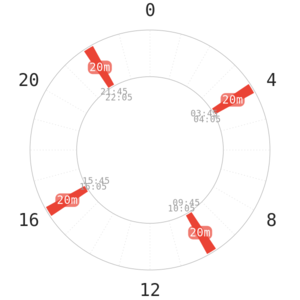 A Tesla variant with equidistant rotation of all naps

This variant was used in the sleep study mentioned above, but even with equidistant scheduling, it resulted in brief failure in all normal, average subjects. An experienced nap-only sleeper who has adapted to other nap-only or highly-restrictive total sleep schedules may be able to adapt to a Tesla variant with equidistant setting, regardless of the hours being rotated.

A lot of health concerns (especially long term) are raised by skeptics and average sleepers about whether the Tesla "mythology" would even be possible. Because of the gigantic amount of sleep reduction, it may attract a lot of attempts. The first concern is the immediate red flag of the glymphatic system. Tesla has no core sleeps to sustain the continuity that the glymphatic system would usually operate (at least ~60m of uninterrupted SWS), so whether the brain would work efficiently enough to clear out all toxin wastes long-term puts Tesla in a very unfavorable spot. The consequences of the failing glymphatic system can easily accelerate the risks and formation of neurodegenerative diseases (e.g, Alzheimer's).

The second concern is whether the schedule is sustainable in the context of external factors. For example, one small drink, slightly walking faster than usual or breaking more sweats, or any other factors that can boost REM and SWS requirements (e.g, sickness, small injury) are likely to negatively affect the schedule.

The third, but not last concern is if a radically restrictive sleep regime can result in a chaotic or dysfunctional hormone regulation. Stress induced during the adaptation process (if prolonged enough) is the most common way to build up the concentration of cortisol in the body, which in return reduces testosterone building, increased heart rate, and more risks for hypertension.

All in all, with all elements taken into consideration, only a very small amount of the human population who can thrive on very little sleep, can sustain Tesla long-term. Polyphasic sleepers with severe insomnia or who have adapted to at least one nap-only schedule are also viable candidates for Tesla. One promising point of Tesla is that there is a huge wake gap (5h40m) between each nap to allow for many activities and commitments to be fulfilled. This is an advantage that an adapted Tesla sleeper can prey on, but other than this advantage, Tesla does not appear to be a friendly adaptation, even for sleep mutants.