DC3, or Dual core 3, is the third dual core schedule, with shortened core sleeps, and three naps throughout the day.[1] With the standard variant, the total sleep of the whole schedule is 4h, which, along with the divided cores, makes it one of the most difficult schedules that an average sleeper may be able to adapt to.

As with other Dual core schedules, the first core should contain mostly SWS, while the second core sleep will contain mixed sleep stages, due to its early placement as well as the inability to gain all of the SWS required during the first short core. Given the low total sleep, the cores should be scheduled close to the SWS peak to ensure the preservation of SWS. The first nap is placed early in the morning, and will likely contain mostly REM sleep, whereas the other two naps may contain a mixture of light and REM sleep, along with trace amounts SWS.

Compared to other dual core schedules the two cores are placed relatively close together, which helps spread sleep more evenly during the day to ensure alertness on a schedule with such low total sleep.

One can start gradually adapt to this schedule from TC2 with modified timings, replacing the last core with a nap, while preserving sleep placements. Alternatively, transitioning from DC2 or DC1 also possible, but have seen no successes.

Starting the adaptation cold turkey has reported at least one successful adaptation. Regardless of the adaptation pathways, all sleepers would need to go through the intense repartitioning of vital sleep stages to be able to adapt to this schedule.

DC3, with its 4 hours of total sleep, is very hard. It is considered more difficult compared to E3, because the SWS has to be repartitioned between the two cores, which can lead to lots of difficult wakes. Compared to Bimaxion, it is similar in difficulty, with both being incredibly difficult, reporting only a few successes over the years in non-short sleepers.

With SWS deprivation being present throughout most of the adaptation, oversleeping can occur in any of the five sleep blocks. Even when the wake gap between each sleep seems to be short, staying awake can still be exceedingly difficult, especially at night.

The extended variant is expected to be easier, and may be a viable route to transition to Ducamayl, though no one has attempted doing so thus far.

In terms of lifestyle considerations, DC3 is similar to the other schedules in the group. Because the frequent sleeps, it becomes difficult to schedule food and activities in to the gaps. The schedule also includes at least two daytime naps, which is difficult to manage for many.

With only 4 hours of sleep, intense exercising may not be suitable as the greatly reduced total sleep may impair recovery processes. Sickness and injury, which can result in excessive sleep, may also break the patterns of the schedule even after adapting. It is also unlikely DC3 will be flexible after adaptation due to its low total sleep.

For these reasons, DC3 is not commonly attempted compared to schedules with similar amounts of sleep, like E3. 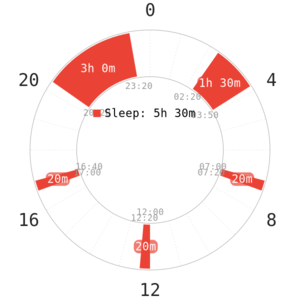 This variant contains an extended first core to ease the SWS deprivation. Over the years it has seen few attempts and only one recorded success. Not much is known about this schedule. It is expected to resemble DC1 and DC2, but with more frequent naps. 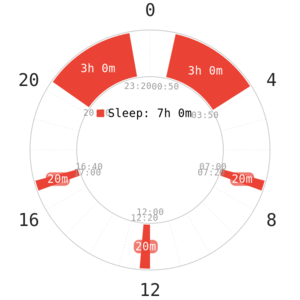 DC3 with both cores extended

One Discord user has adapted to a variant with both cores extended to 3 hours, with the core gap reducing to only 90 minutes. This does not pose issues as the user is an experienced polyphasic sleeper who have been adapted to a similar Segmented schedule before, and has good napping skills.