Translate this page
Other languages:
English • ‎русский
This is an unadvisable schedule, as its total sleep time is considered to be below the bare minimum required for most people.

Dymaxion is a nap-only schedule,[1] which contains four 30-minute naps evenly spaced throughout the day, for a total of 2 hours of sleep.

As with other schedules, there are a few different adaptation methods. However, adaptation to this schedule is extremely hostile, likely greater than even Uberman due to its longer gaps. The difficulties in adapting to Uberman are also present in Dymaxion, and it is advised that beginners do not attempt the schedule. 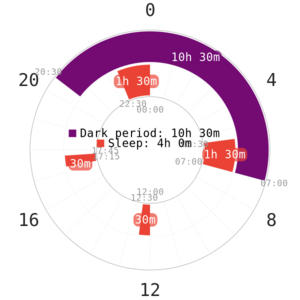 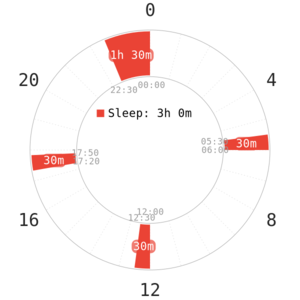 One way to gradually adapt to Dymaxion is to start an adaptation to either Trimaxion or Bimaxion first, and then change a core sleep to a nap one at a time to finally reach Dymaxion. Sleep timings of these two schedules resemble Dymaxion. Starting from Bimaxion, one core is shortened to 30 m after adapting to the previous schedule until every sleep block is 30 m long. This approach suffers from the same issues as the gradual adaptation to Uberman.

However, Bimaxion has since been considered one of the most difficult schedules to adapt to, and Trimaxion has so far seen no successful adaptations. As with gradually adapting to Uberman, it would take a very long period of time to reach Dymaxion, and the final adaptation can still fail.

So far all successful Dymaxion attempts have been achieved through this method. A few days after starting, intense sleep deprivation will become ensue, which needs to be overcome.

As with Uberman, it is strongly recommended to have human supervision to avoid oversleeps. Any oversleeps will greatly set back the adaptation process, effectively resetting the whole nap architecture built up to that point.

Dymaxion shares a lot of similarities to Uberman, including extreme difficulty and very low flexibility. Like with Uberman all of the SWS and REM must come from naps on this schedule, so the amount of SWS and REM in proportion to light sleep is very high. Dymaxion still tends to be less popular than Uberman.

Difficulty-wise Dymaxion is likely harder than Uberman. Because of the larger gap between naps (5h30m compared to 3h40m), sustaining wakefulness will be more difficult than on Uberman. Since SWS usually begins by the 25-minute mark, naps will contain SWS right from the start, which may cause SWS wakes as soon early on. However, this matters little overall, as overcoming the SWS rebound is necessary in order to adapt to either schedule.

SWS wakes in naps may cause difficulty hearing alarms, which may directly cause oversleeps, even without consciously deciding to. It is also much more tempting to go back to sleep after an SWS wake, even if you do wake up. Naps ending in SWS are less likely to produce dream recall, which may be unsatisfying to some.

Compared to Uberman, Dymaxion allows for a wider range of daily activities with its longer wake gaps. The 1-2 daytime naps can fit into normal jobs as long as it is possible to nap at work. For a nap-only schedule, Dymaxion is an excellent choice as long as the necessary sleep requirements are met. In this aspect, it is preferable to Uberman, even though the adaptation may be even more difficult.

It is virtually impossible to flex naps on Dymaxion, even after the adaptation. Regular alarms may still be needed to wake up, because of the high sleep pressure. However, one successful case has shown the possibility of moderate exercise (light lifting and calisthenics) on Dymaxion. However, said Dymaxion sleeper also experienced more frequent muscle soreness and noticeably slowed recovery after each exercise session.

As with other nap-only schedules, there are long-term health risks of Dymaxion, such as the implications of inhibited glymphatic system and long term sleep deprivation). Average sleepers are discouraged from attempting Dymaxion. 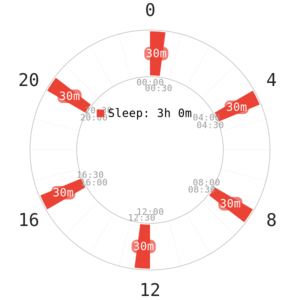 Dymaxion 6 resembles the structure of Uberman, with the difference being its 30-minute naps instead of 20-minute ones. As with regular Dymaxion, these naps can lead to SWS wakes and may introduce difficulties early in the adaptation, though likely not an issue by the middle of the adaptation. A few people have been able to adapt to this variation, and it suffers the same inconvenient scheduling as Uberman. Though it has substantially more total sleep than regular Uberman or Dymaxion, it is still a difficult schedule. It has the same problems as other nap-only schedules, like extreme rigidity and potential negative health impacts.

There has been one single-case study[2] on Dymaxion-6 conducted by Claudio Stampi. Francesco Jost was the volunteer for the study. He participated in another study prior to this one, which inspired this idea. Jost was a normal monophasic sleeper (8h baseline), in good health conditions and did not have any polyphasic sleeping experience before these two attempts. It is possible that he has average REM and SWS baselines.

The study lasted for 48 days, of which 34 days were used to adapt to the schedule, discounting some transition days in which he gradually reduced sleep. On day 34 and after the end of the experiment, he was allowed to sleep ad lib, that is, as much as desired.

No EEG recordings were obtained for this study. Nonetheless, multiple cognitive and performance tests were before, during adaptation, and after recovery. These tests include a DST (Descending Subtraction Test) and an MAST (Memory & Search Test).